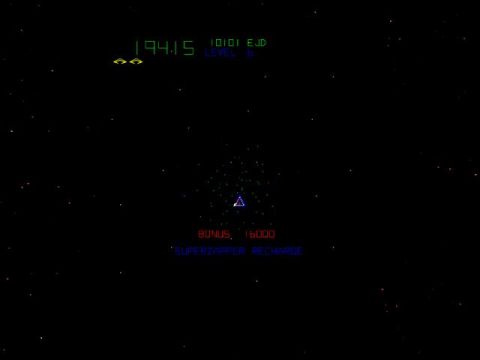 Tempest is the latest in a line of classic Atari coin-ops that suffer from the restrictions of the contemporary console controller. On the original arcade machine, this pseudo-3D shooter was controlled using two fire buttons and a rotating dial - a "spinner" to arcade fans - to move around the rim of the more-or-less tubular play field. It's a setup that a regular d-pad or analog stick just doesn't emulate well, and that basically makes what was already a difficult game a punishing experience for most players.

If you're some kind of Tempest savant, though, Tempest was fairly brutal to begin with, and on Live Arcade it comes with Atari's standard "Throttle Monkey" difficulty setting. Here, the game moves faster and is generally more difficult, cutting the experience to under a couple of minutes for many gamers.

Of course, no Atari Live Arcade game is complete without the newer, shinier, trippy graphics version thrown in. And while the redesigned Tempest visuals are fine on their own, they tend to actually make the game harder to play, thanks to visual effects sometimes obscuring the play field.

On top of that, the game that kind of started this whole acid-trip visual style back in 1994 was Tempest 2000 on the Atari Jaguar. That game looked and sounded fantastic, and this version of Tempest pales in comparison. This is a true classic - it just isn't a lot of fun to play.