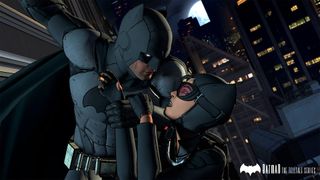 [UPDATE: Telltale’s Job Stauffer has contacted me to clarify that it's 'aiming' to complete the season by the end of the year. There's always 'room for dates to shift' but the plan is to see the majority, if not all, the episodes this year.]

How Telltale's more narrative focused take on the Dark Night’s adventure plays out is something we’re looking forward to experiencing. While there’s no release date, yet we do now know that all episodes in the first season will be out by the end of this year.

Telltale’s Job Stauffer won’t commit to a firm release date yet, only saying that “we are bringing this to market soon”. However, he did clarify that, “we’ll have all 5 episodes out before the end of the year”. Realistically, assuming an ep a month, that means we have to be looking at either a July or August release date for the caped crusader.

We’ve already seen the opening 30 minutes of the first episode and it’s looking good, with Bats running into both Catwoman and the Falcone crime syndicate. It’s also a perfect opportunity to spend more time with Bruce Wayne. Traditionally it’s a side of the character that's hard to make work in games, but Telltale’s style of storytelling is perfectly placed to explore the other side of the cape.

You can read more about Batman: A Telltales Series in  next month's issue of GamesMaster