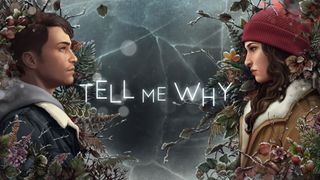 Dontnod Entertainment's fascination with the inner machinations of the mind has begun to border on obsession. The studio has always made memory a central pillar of its narrative and mechanical design; Remember Me, Life Is Strange, Vampyr, and the upcoming Twin Mirror are immersed in the realm of memory recollection and manipulation, of the reframing and obfuscation of experiences once lived but long forgotten. Dontnod is about to put its decade of experience in this area to the test as it partners with Microsoft Game Studios for Tell Me Why.

"Every time that we start a new game, we want to tell a new story. We make games to tell deep stories with strong, original characters that can touch people's lives," Florent Guillaume tells me. "For this game, we wanted to tell the stories of identical twins that are deeply connected by a strong, supernatural bond – one that allows them to share their feelings, their thoughts, and their memories."

That, the game director explains, is "the key mechanic for the game" and I can't say that I'm surprised by that revelation. What I am surprised by is just how far the studio is taking the concept. Tell Me Why is an intimate thriller that will explore the loving but troubled childhoods of Tyler and Alyson Ronan, twins reunited after a decade apart.

Told across three episodically released chapters in summer 2020, Dontnod will take us on a journey to Delos Crossing, Alaska, before leaving us there to untangle the mysteries of the twins' past and to help shape the future course of their lives. You'll do that in a literal sense, as the decisions that you make throughout will help the story take shape. In its seventh game, Dontnod is exploring whether our memories are ever more than a matter of perspective.

A matter of perspective

Unlike Vampyr, Tell Me Why isn't going to be a massive departure from the type of core play that helped propel Dontnod from independent-upstart to a chief purveyor of narrative-driven adventure in the games industry. It'll be an expansion of its work on Life Is Strange, simple and effective play guided by decision making. This means that you'll be free to explore Delos Crossing at your leisure, you'll have the space to speak with the town's local inhabitants, and the time to explore and strengthen the familial bond between Tyler Ronan and his twin sister Alyson.

Dontnod doesn't aspire to change those fundamentals because it wants you to be able to engage and enjoy the story it is trying to tell, regardless of your experience with the language of the interactive medium. "We create and tell stories at Dontnod; we don't want to have super-complex gameplay because we don't need to," Guillaume explains. "We rely on classic adventure gameplay because we are trying to place players inside of our games. We invite players into the world and give them the time to dig in and connect with the story and characters."

Dontnod is investing in a strong narrative hook and a new key mechanic for you to explore its characters, story, and world. The hook is rooted in the belief that children are more susceptible to forming false memories than adults; the mechanic in an understanding that the experiences, events, and emotions that we are able to remember as children can ultimately shape who we become as adults. Tell Me Why explores the intersection between these two ideas, as twins reunite to recall and reconsider points of conflict in their formative years.

"The twins can recall and project their memories, relive them, and share them together. And because we have these two lead characters – you don't just play as Tyler or as Alyson, you get to play as both of them as the story unfolds – we are able to explore the question of perspective," Guillaume tells me, though the reasons behind the twins' estrangement and reunion is under wraps for the time being. "They haven't seen each other for 10 years – they were children at the time – so they may have different perspectives and they may remember events differently."

"You know, your childhood memory of an event might not be an accurate [reflection] of what actually happened," Guillaume continues, explaining you will have the opportunity to ultimately decide which version of events is canonical in Tell Me Why, with that decision ultimately affecting the branching pathway of the narrative. "So we play with the notion of memory. We play with the notion of perspective. We allow the player to decide which story they want to explore and which of the twins to believe."

Dontnod setting perspective and false memories as the groundwork for a new experience is interesting enough, but it isn't the only reason Tell Me Why has turned heads. The games industry has long struggled with representation, inclusivity, and diversity, especially with respect to its leading protagonists.  Major studios have a habit of failing to accurately reflect the breadth of people that play and Dontnod is hoping to inspire change with its upcoming release.

Tell Me Why will be the first game from a major studio to feature a playable transgender lead character. Guillaume tells me that Tyler wasn't always going to be a transgender man in Tell Me Why, but rather that Dontnod landed there as it began to sure up its story and central concept. "When we started work on the game, this was not part of the initial plan. When we signed with Microsoft, we didn't sign and go, 'OK, we need to get a game with a representative character!' We came in with this initial idea and, as we developed the characters and the story, because we are talking about twins in this game, two identical people, we wanted each of the characters to be unique and to be representative of their own identity."

"That's when we came up with this idea, this really strong idea," Guillaume continues, explaining that the studio didn't want to force it, but rather settle on something that it knew it could handle respectfully, that would make sense for the story and characters. "It was something we wanted to tell our audience. It was something that we believed in, but it became very clear to us that we needed to research the transgender community – that we needed to reach out and get help – to make sure that we told this story in a meaningful and in a respectful way."

Dontnod is developing Tell Me Why with guidance from a number of LGBTQ, cultural, and mental health advocacy groups in support of its characters, story, and themes – such as the Huna Heritage Foundation, CheckPoint, and GLAAD, the Gay and Lesbian Association Against Defamation. "Microsoft and Dontnod have approached Tyler with a real commitment to authenticity," Nick Adams, director of transgender representation at GLAAD, told me over email. "Tyler is a fully-realised, endearing character, whose story is not reduced to simplistic trans tropes. Creating a playable lead trans character – and taking such care to get it right – raises the bar for future LGBTQ inclusion in gaming."

Guillaume tells me that GLAAD also assisted with the casting of Tyler, who is voiced by trans actor August Black, and the organisation has consulted with the game maker throughout development on everything from story, dialogue, character design, and has helped the studio to better understand the "history of representation in the media, and the struggle that the committee faces." The goal, Guillaume assures me, was to ensure that Tyler is a multi-dimensional and genuine character, one that can avoid the many harmful stereotypes and tropes that have affected the transgender community across the spectrum of entertainment mediums.

"It was really enlightening for us, and it helped us along the way to get to get to a point where we have a character that we really believe in. We strongly love this character – both of them, Tyler and Alyson [voiced by Erica Lindbeck] – and that's what we're looking for. We tell the stories for them, for the characters. The story wouldn't exist without the characters."

Matt Booty interview: The head of Xbox Game Studios talks Project Scarlett and the desire to "deliver a game every three to four months"

Guillaume has been making games for close to 15 years now, but for him the reveal of Tell Me Why feels like a watershed moment. It was Life Is Strange, after all, that convinced him to leave Ubisoft Montreal after close to a decade. "I played Life Is Strange and it put me into the shoes of this character, Max. I didn't think it would be for me, you know; I didn't have a connection to this character or this story. But as I played I got so deeply connected to this character and I had so much empathy… I was just blown away by it," says Guillaume.

"I was working at [Ubisoft)] at the time. I was like, 'OK, I want to work with them!' so I resigned and joined Dontnod a few months later," Guillaume laughs as he recalls this story, it took just three episodes of Life Is Strange to release to convince him that he wanted to be creating Dontnod's particular brand of universally relatable games. "You know, we don't just push buttons anymore in games. We're not just here for a challenge, or to compete with one another; we can do greater things. That's what I see in video games and that's why I think games like Life Is Strange and Tell Me Why are important."

Guillaume accepts that the industry still has a long way to go when it comes to representation and inclusivity in the characters entrusted to lead major studio releases, but he believes that it's the mere existence of something like Tell Me Why that can highlight that it is moving in the right direction. "I would say that video games have a special ability to connect a player with a character. When you watch a movie, you get to watch a great story and great characters. But in games you get to play as that character. You get to embody that character. I think that's a really strong power that games have."

"The medium is opening up, it has reached a certain point of maturity where we can explore a lot of different themes and subjects. For Dontnod, today, we are all very happy – we are proud – that we are able to have a character that is going to be representative for a lot of people," Guillaume tells me. "I think the medium has opened up for this kind of game, for this type of more mature, more profound story. I'm excited about that and I'm really excited to develop more stories like this in the future."

Tell Me Why episode 1 will launch summer 2020 on Xbox One, Xbox Game Pass, PC, and Steam.