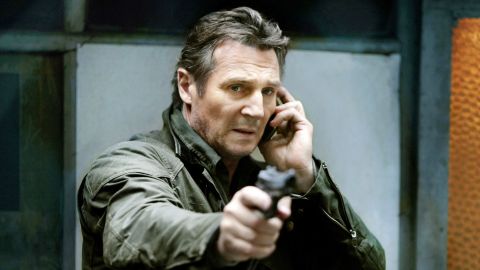 A muscular action thriller with dubious racial politics, Taken sees Liam Neeson cut up rough as a retired CIA operative out to rescue his daughter from evil Arabs.

It’s Bourne in middle-age: a straightforward shoot- ’em-up given a little heart by the regret and redemption of a hard-working professional trying to re-connect with his alienated sprog.

The story’s as simple as it sounds. After a half hour of scene-setting – Neeson’s a deadbeat dad who has put his country before his family; his ex-wife (Famke Janssen) just doesn’t understand; his daughter (Maggie Grace) is spoilt but, y’know, adorable – we’re off to Paris, where Grace is soon half-inched and scheduled to be sold. So Neeson decides to kill them and get her back.

Then we’re into a string of set-pieces of varying degrees of brutality, as Neeson storms through the French capital on his bloody, one-man revenge mission. The script displays all the subtlety we’ve come to expect from the Transporter writing team of Robert Mark Kamen and Luc Besson.

Visually we’re in familiar territory, too, with Pierre Morel – director of District 13 and cinematographer on Louis Leterrier’s Unleashed – opting for fast-cut camerawork and relentless energy to keep you going once your disbelief hasn’t so much been suspended as hung, drawn and quartered.

Definitely not Bourne then (not even The Transporter – it’s not as much daft fun), but reliably hard-headed entertainment for the graphic-action demographic.