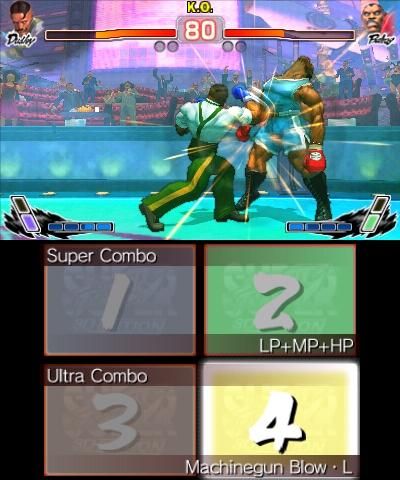 While it rules the console fighting game scene with an iron fist (sorry Tekken), Street Fighter’s handheld offerings have almost always had to make some kind of sacrifice. Early conversions to the Game Boy family had to deal with fewer buttons and hardware limitations, which meant console-level play was impossible. PSP’s Alpha 3 Max was a brilliant, functional port, but it came a whopping eight years after the arcade original – hard to muster up excitement for something that old.

Super SFIV 3D suffers from neither of these issues, instead offering a playable, shockingly accurate representation of the 360/PS3 gamereleased less than one year ago. To say it’s impressive is an understatement; we expect new hardware to wow us on some level, but a nearly perfect, graphically intense console-quality fighter, all crammed onto one card? That’s a technical achievement to be proud of, even if the main point of the system (3D) isn’t harnessed particularly well.

Above: The gimmicky (and optional) over the shoulder view isn’t great, but the standard view is dead on

Between Vanilla and Super, I’ve spent more than 120 hours in the Street Fighter IV world. In that time I’d like to think I’ve learned a thing or two, so when I say this conversion is dead on, I really mean it. Any combo I can pull off on 360 or PS3, that same combo is possible on 3DS. The animations are correct, the timing feels right, the sound effects convey the same subtle information necessary to make split-second decisions… it’s all there. Capcom even included makeshift Achievement/Trophy medals to unlock, just in case you miss earning pointless awards while playing.

Taking the fight online is quick and easy, though the quality of each connection varied wildly. Many of my multiplayer battles (including local wireless matches) suffered from notable slowdown that drastically affected both players’ performance. This issue could vary per player, per hotspot or per region, but in my experience the multiplayer was anything but smooth. The lag throws off any sense of timing or flow, which makes punishing whiffed moves a pain and usually leads to eating combos you’d otherwise block. Perhaps when more US-region players get their hands on the game this will ease up? The few matches I had that moved as smooth as the offline game were excellent, fast-flowing scuffles, so I’ve got my fingers crossed.

The stuttering nature of the multiplayer compounds the only other concern we had with Super SFIV 3D – the button layout. As with the aforementioned PSP version of Alpha 3, there are enough buttons, but there’s the unavoidable issue of the shoulder buttons. In a game that (usually) moves as fast as Street Fighter IV, you need easy access to all inputs; the L and R buttons are out of the way, making certain characters excessively difficult to play, and even then the 3DS face buttons are tiny and easily stumbled over.

This isn’t equivalent to playing with a SNES or PS3 controller – you’re holding an entire machine in your hands, which has its own weight and resistance. Is it possible to overcome these problems and go on an online winning streak? Sure, I saw no shortage of B and A-rank fighters who played as if they never left the arcade. But when you’re fighting lag and the button layout, the experience, while still technically accurate to the console version, starts to sag.

Fortunately, Capcom included a slight workaround for this…