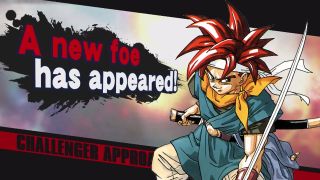 Super Smash Bros. is coming to Nintendo Switch, and you know what that means: time for some baseless speculation on new characters that may or may not be involved this time around. After all, a new Smash Bros. - whether this game is largely a port of the Wii U / 3DS version or built from scratch - is a chance to see new faces.

With that in mind, we've put our heads together and come up with 20 suggestions for characters we think would make fine additions to the Super Smash Bros. for Switch roster. Rather than rank them by any subjective metric though, we're just going to list these bad dudes and dudettes in alphabetical order, starting with...

Super Smash Bros. is all about letting Nintendo fans enjoy their favorite Nintendo things, albeit in a different framework. Sure, Nintendo may not technically own Banjo & Kazooie, but no amount of nuts and / or bolts is going to stop people from associating these mascots with the N64. Besides, Xbox boss Phil Spencer has said he's cool with it.

Look, I'm not a fan of Super Smash Bros. turning into Guys With Swords: The Fire Emblem Fighting Game either, but Camilla presents an opportunity to do something different with the tactical RPG franchise. She wields a massive axe (unique among the Smash Bros. roster) and rides into battle on a wyvern. Make her an air-focused character with some great smackdown potential.

Smash Bros. has just about every member of the Mario family; Mario, Luigi, Peach, Bowser, and Yoshi all exist as their own separate playable characters. But Toad is relegated to a shield used by Peach? Unfair! Thankfully, there's precedent for this mushroom-headed sidekick striking out on his own in Captain Toad: Treasure Tracker. So why not go the distance here as well?

Champions of Hyrule (Legend of Zelda: Breath of the Wild)

Lady Urbosa, Mipha, Revali, and Daruk could all hold their own in a fight, but why pick just one? Instead, Nintendo could implement a system similar to the Pokemon Trainer character from Super Smash Bros. Brawl and make these heroes swap in and out, one at a time. Imagine launching an enemy high with Revali's Gale, then blasting them with lightning from Urbosa's Fury. Sound cool? That's because it is.

Another property now owned by Xbox that fans nonetheless associate with Nintendo, Conker would certainly have to be toned down for inclusion in a Smash Bros. game. Truth be told, he's one of (if not the) least likely inclusion on our list, but come on, admit it; it would be fun to see this cranky little boozehound mixing it up with other Nintendo elites.

Cloud from Final Fantasy 7 being added as a guest character in Super Smash Bros. for Wii U / 3DS was one of those fabulous surprise announcements. And while we're happy to see him included, it seems to us that if Square wanted to send one of its JRPG heroes into the melee, the more obvious choice would be Crono from Chrono Trigger. This game is frequently hailed as one of the best of all time, and it came to life on a Nintendo system. Get this spiky-haired kid in there, already.

Ice Climbers debuted in Super Smash Bros. Melee and returned for Super Smash Bros. Brawl. They were left out when Super Smash Bros. 4 rolled around due to system restraints and a desire to keep the roster identical between the Wii U and 3DS versions of the game. The Switch should have no such limits, which means it's time to rectify that mistake.

Link, Zelda, and Ganondorf are, of course, the most important characters in the Legend of Zelda series. But that doesn't mean there isn't room for other heroes from that universe, and Impa is among the strongest and coolest. Plus, by using the Hyrule Warriors version, Nintendo would technically be representing another of its games and, as we already established, a big part of Smash Bros. is Nintendo showing off just how much stuff it owns.

The Yo-kai games never really took off in the West like Nintendo and Hasbro probably wanted, but it's still full of delightful, charming, and recognizable characters. Chief among them: Jibanyan, the cat yokai. He's got various forms that would correlate well to a unique moveset, and tons of costumes if players want alternate skins. Besides, Pikachu needs to pick on someone his own size.

Oh hey, another Rare property that would be a dose of nostalgia for longtime Nintendo fans. True, Joanna is a bit reliant on guns in her own games, but there's no reason her arsenal couldn't be translated into this 2D-plane fighter. Hey, if they could make Solid Snake work, they can do the same for Joanna.

I know Krystal is something of a black sheep (despite being a blue wolf) because she comes across as oversexualized pandering to the furry community, but she's a legitimately interesting character who doesn't get enough attention outside of the game she debuted in. And, unlike Falco or Wolf, Krystal would be a good excuse to bring in a character from the StarFox universe without them being yet another Fox clone.

This one's a bit of a deep cut, but back in the day, there was a series of games starring a hot-blooded tough guy named Kunio, developed by Technos Japan. One of the best and most popular was Downtown Nekketsu Monogatari. In Europe, it was called Street Gangs. In America, you probably knew it as River City Ransom. This NES game was highly influential in the beat-em-up genre, which Smash also draws inspiration from. Heck, you could even give him a projectile attack based on his appearance in Super Dodge Ball.

With Mario a sure bet and Dr. Mario a likely candidate, it may seem like adding the paper version of Nintendo's plucky plumber would be a case of Too Many Marios. But we think that given Paper Mario's distinct look and reliance on his trusty hammer, he would be different enough that it wouldn't feel like a third wheel. If anything, model him on Mr. Game & Watch.

WayForward's purple-haired sorceress may be multi-platform now thanks to her Kickstarted game Half-Genie Hero, but she got her start on Nintendo platforms, and has even guest-starred in a WarioWare mini-game. So really, her inclusion in Smash Bros. wouldn't be too much of a stretch. With tons of magic at her disposal and a cartoonish style that would fit easily in the world of Smash Bros., she'd make a fine addition to the roster.

This one's actually an old rumor, but what a great opportunity to make it true! Shovel Knight was crafted as a loving homage to NES games, and the character even has an amiibo. His signature shovel would make for a unique weapon amongst the plethora of sword-wielders, and it wouldn't be too difficult to translate his pogo stick-like bouncing into a devastating down attack.

Castlevania got its start on the NES, and other than Dracula and maybe Alucard, there's no one more emblematic or iconic from the series than Simon Belmont. His whip attacks would make for some interesting tactics, and the various power-ups could add enough variety that he'd be a worthwhile addition. Nintendo could even start adding cooked chickens as a health recovery item!

An oldie-but-goodie, Starman is a luchador from the NES game Pro Wrestling. With a star-shaped mask and powerful suplex moves, he would make for an exciting and unique addition to the Smash Bros. roster. True, he's not as recognizable as some of the other entries on this list, but he holds a special place in many an early Nintendo fan's heart. At least make him an Assist Trophy.

Come on, look at poor Sonic, all by his lonesome. The novelty of Sega's hedgehog has worn off by this point, and now we can't help but wonder where his best friend Miles ‘Tails’ Prower is. Not only is this two-tailed fox cute as a button, but his ability to fly would help him recover from falls that would eliminate anyone else. He's also known to be something of a tinkerer, so maybe have him toss wrenches or use gadgets if you want to add some variety.

The anti-hero from No More Heroes already has a strong relationship with Nintendo, having debuted on the Wii and coming soon to the Switch with Travis Strikes Again. He's a bit crass (though not so much as Conker) and he would be essentially another 'guy with sword'-style fighter, but hey, at least his weapon is a laser sword.