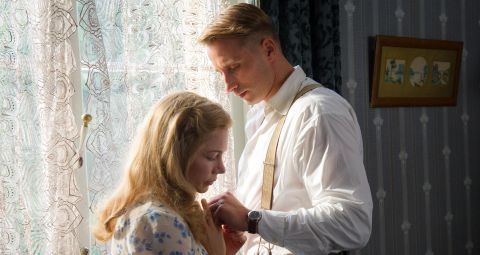 A much-admired text is respectfully brought to the screen in a film that nonetheless struggles under the burden of its war movie clichés.

It’s hard not to think of The Pianist while watching Saul Dibb’s WWII drama, an old Joanna becoming, as in Polanski’s Oscar winner, the thing that brings an occupying Nazi soldier and a member of the occupied together.

This time around, though, it’s the German who has a flair for ivory-tinkling, as Matthias Schoenaerts’s officer uses his unexpected talent for composition to win the affection of a young Frenchwoman (Michelle Williams) in whose provincial home he’s been summarily billeted.

Adapted from an unfinished novel by Irène Némirovsky, a French-Ukrainian Jew who died in Auschwitz before she could complete an epic, five-part portrait of life under the Nazis, Suite understandably concentrates on its most accessible aspect: a forbidden romance that puts both Williams and Schoenaerts at odds with their respective camps, represented on Williams’ side by her sternly disapproving mother-in-law (Kristin Scott Thomas). (Williams, we learn, has a PoW husband of whom she is only moderately fond.)

Yet Dibb and co-scripter Matt Charman do at least make a stab at including a smattering of Nemirovsky’s vast supporting cast, among them an embittered farmer who joins the Resistance (Sam Riley) and a couple of aristocrats only too happy to make nice with the enemy (Lambert Wilson and Harriet Walter).

The problem, for British audiences at least, is this sorry episode in French history has been so roundly and repeatedly parodied – principally by long-running sitcom ’Allo ’Allo – it’s hard at times to take Dibb’s film seriously. Still, this is a handsome production on an important theme with a deeply tragic backstory, shot with precision and acted with conviction.

A much-admired text is respectfully brought to the screen in a film that nonetheless struggles under the burden of its war movie clichés.