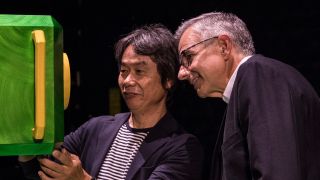 The world of Mario is coming to real life and you won't even need to flush yourself down a warp pipe to get there. Nintendo and Universal have announced that three Universal theme parks around the world will receive new areas filled with Nintendo-themed attractions over the next few years: Universal Orlando Resort in Florida, Universal Studios Hollywood in California, and Universal Studios Japan in Osaka.

The two companies marked the announcement with one of the most whimsical videos starring two high-ranking executives you're even likely to see. Everyone is very happy about the Question Blocks.

According to a joint press release from the two companies, work on the Nintendo-themed areas is "well underway" and they will all open separately over the next several years. They'll each feature "highly themed and authentic environments" where visitors can try out multiple attractions and visit shops and restaurants.

All the talk has been about Mario-related things so far, but I really want to visit an Animal Crossing cafe and have a man in a giant pigeon suit serve me black coffee. And I don't even like coffee! Here are some more of the attraction ideas we had for Mario, Zelda, Metroid, and more back when the partnership was first announced.

Universal says the first details about the new Nintendo areas "will come soon" as individual announcements from each park. Now excuse me while I work on my vertical leap for IRL Goomba stomping.