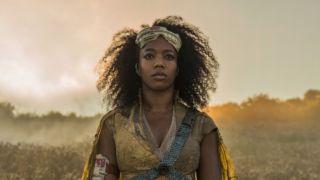 Star Wars: The Rise of Skywalker is just two months and four days away (we're not counting or anything), yet we still know very little about the final instalment in the Skywalker saga. Rey's back, but has she turned to the dark side? Poe's back, but has his romance with Rose blossomed? Palpatine's back... how?!

We also have a multitude of questions regarding the new characters, including Naomi Ackie's Jannah. Speaking to our sister publication Total Film, the actress – previously best known for a stand-out role in Lady Macbeth – teases Jannah's role in The Rise of Skywalker, and it looks like she could play a key role in the Resistance's final fight against the First Order.

“Jannah is a warrior, and she comes into contact with the rest of the group at a point where they need some help," Ackie says. "She is part of the Resistance, and she’s spent a long time acquiring skills that might be helpful when it comes to the big conclusion of the film. So she shows up at the right time.”

One of those skills is riding an "orbak" – a new horse-like creature seen in the trailers for The Rise of Skywalker. “I was training for seven months, three times a week, at an amazing horse ranch called The Devil’s Horsemen," she says of learning how to ride a horse. "By the end of it, I could canter without any hands. I could play catch with balls while on a horse… It’s the best part of the job – you get paid to learn!”

Ackie spoke at length with Total Film magazine in the new issue, which reaches store shelves on October 18. Meanwhile, Star Wars: The Rise of Skywalker reaches cinemas December 19 in the UK and December 20 in the US.