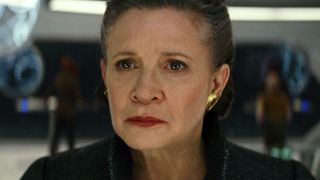 Some new behind the scenes Star Wars: The Rise of Skywalker footage has leaked, and with it is a tribute to Carrie Fisher that will probably make you cry. Spanish-language YouTube channel Noticias Geek TV dropped a seven-minute long video featuring uncut footage from the filming of Rise of Skywalker. Check it out below.

There's a lot of raw footage in here, but what caught my eye falls at around 03:18. Kelly Marie Tran (Rose Tico) and Billie Lourd (Lieutenant Kaydel Ko Connix) are palling around between scenes set on some type of forest planet. Billie Lourd is wearing a camo rain slicker and has her hair done in a braid that circles her head - doesn't that look familiar? It should, as it's basically Leia's exact outfit in the Endor scenes in Star Wars: Return of the Jedi. Since Lourd is Carrie Fisher's real-life daughter, this is a subtle and touching tribute to the late Fisher that certainly brought a tear to my eye. Check out the comparison below.

The rest of the footage includes a ton of clips of the production process, sometimes set to piano music, sometimes devoid of any background music at all. We see Naomi Ackie's character Jannah and Daisy Ridley's Rey getting instructions from their stunt coordinators, Oscar Issac's Poe Dameron, John Boyega's Finn, and Chewy in the cockpit of the Millennium Falcon, and Richard E. Grant and Domhnall Gleeson doing some shady First Order business. Fast forward to 04:30 for some adorable Chewy and BB-8 cuddles.

All of the recently released footage has got me more than ready for its December 20 debut. The newest Star Wars: The Rise of Skywalker clip even has a major spoiler in it. Beware.