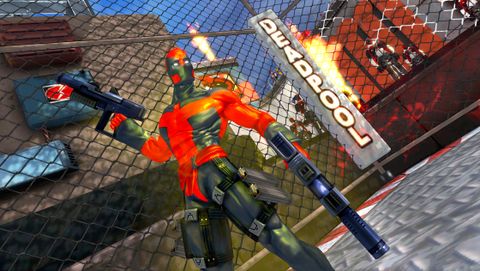 It's tough to make a great game of any kind, but license a comic book property with millions of nerdy, detail obsessed fans, and it’s even harder. Still, Spider-Man has had a pretty good relationship with gaming this last decade, but for every Spider-Man 2 and Web of Shadows there was a Spider-Man 3 and Friend or Foe. Things were getting a tad stale for Spidey games, so Activision and developer Beenox decided to try and shake things up with Spider-Man: Shattered Dimensions and its collection of four different Spider-Men. Did that gamble pay off, or should this haveremained a What if… ?

They do whatever some spiders can

The main conceit of the game is that due to the destruction of some magical artifact, the bonds between dimensions have weakened, bringing together four Spideys from alternate universes. Each works independently of the others to find fragments of the artifact in each of their worlds, which is usually held by some baddie who’s enchanted by the artifact’s power. Thus each Spider-Man has to take down a member of their rogues gallery and hundreds of goons to get back another piece of the puzzle.

Above: From left to right - 2099, Amazing, Noir, and Ultimate Spider-Men

All the Spider-Men are both different and the same. All their movements are generally the same, as are the combo-heavy attacks and web-swinging controls. But the big differences are in the details: the Amazing Spider-Man plays mostly like a no frills, classic action game; Spider-Man Noir is very stealth-based; Spider-Man 2099 has some free-falling sections; Ultimate Spider-Man occasionally goes into a berserker rage when the symbiote he’s wearing takes over. This is almost like reviewing four different, smaller, but eerily similar games.

At first I was most drawn to the Amazing universe, as I think superhero comics don’t get much better than classic red and blue Spidey. Amazing has the most creative combos and the best voice acting in the title, which I’ll go into later. However, as I continued playing, I began to find those portions less amazing, or spectacular for that matter. After going through the other worlds, regular Spidey, who lacked all his brothers-by-another-mother’s abilities, got to feel pretty vanilla.

Just comparing Amazing to its most identical universe, Ultimate, it comes up short. Taking a similar approach to graphics as the Ultimate Spider-Man game from a few years ago, the Ultimate levels have almost all those same combos, and traversing the levels is very similar, in spite of the world’s unique feel. But at the very least Ultimate’s Rage mode lets the player cut loose and feel like an unbeatable god for a little while as he pounds his 100th faceless goon into the ground.

Outside of its techo, Blade Runner-inspired, futuristic look, Spider-Man 2099 has some other nice tricks to separate it from the pack. Firstly, each level has a free falling segment that plays on 2099’s true-to-the-comics gliding abilities. Each time these parts play like a miniature racing game, a snazzy change of pace from saving your literally 30th civilian from drone-like henchmen. Additionally 2099 possesses the ability to slow down time, where he can beat up guys in slo-mo, a slightly tired trick, but still fun.

Spider-Man Noir is the most unusual of all the worlds, as his levels are based almost entirely around stealth. His are the most inventive levels of the whole game, as you jump from perch to perch, doing your best to hide in the shadows and quietly take down guard after guard. The mechanic owes much to Batman: Arkham Asylum’s sneaking system, but when compared to that game it seems a little lacking, especially when you meet some very sensitive and overly perceptive guards.