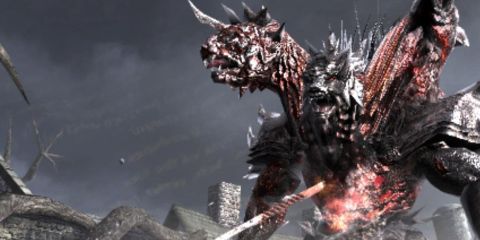 Any time there’s mention of “high fantasy” these days, someone’s bound to roll their eyes and scoff. Tolkein’s core of orcs, elves, and magic has been so thoroughly tapped by the last 70 years of pop culture as to lose any connection to its imaginative roots. So when something comes along that portrays goblins as melting rat-demons, it tends to stand out. Soul Sacrifice comes from a supergroup of Japanese video game veterans and brings with it one of the strangest and most creatively rich worlds yet seen in this thematic realm--making it all the more frustrating that the game lacks a compelling story and fails to realize its full potential.

Soul Sacrifice opens in first-person perspective, placing you in the body of a nameless, faceless prisoner in a grisly cage of skulls and bones. After witnessing the brutal sacrifice of another similarly imprisoned fellow, the silent protagonist finds a living book, named Librom. He serves as your companion, guiding you through his pages, teaching you the ways of sorcery and combat so that you can become powerful enough to escape your infernal prison. Standing as one of the stranger video game introductions, it establishes a dark tone for this very adult real-time RPG.

When thumbing Librom’s pages, you’ll have the opportunity to relive memories of the book’s author. These take the form of Phantom Quests, most of which revolve around finding and killing monsters in a given area. Upon death, enemies can either be saved or sacrificed, which will help boost defensive stats and offensive stats respectively. Over time, these choices will have more significant effects, and influence the kinds of magic and bonuses you can use.

The moral themes on display here are largely superficial, but the Save/Sacrifice mechanic leads to some pretty interesting gameplay situations. Sacrificing other party members, for example, will trigger an incredibly powerful spell that can turn the tide in any one of the game’s many difficult boss battles. Conversely, saving someone mid-battle will cost half your health, but give you a kind of insurance policy should you need reviving yourself.

If you surround yourself with more evil party members, they're much more likely to sacrifice your fallen body to fuel their own powerful magic. Battles can be won or lost simply by carefully managing these dynamics, and it’s quite possibly one of the few moral choice systems in games that bring out some excellent gameplay without contributing to the plot in any meaningful way.

In fact, Soul Sacrifice’s entire narrative is dull and lackluster. There are few, if any, real characters and very little that would resemble traditional storytelling arcs. Flipping through Librom’s pages, all you’ll hear is a grating, monotone voice-over as wiggly letters scrawl across the screen. Occasionally you’ll be treated to some pretty art, but the lion’s share of the exposition consists of listening to a mediocre voice actor work his way through an excruciatingly overwritten mess.

For many, that’s going to be a deal-breaker. If you do choose to stick around for the full 30+ hours, you’ll find one of the most visually inspired games in recent memory. Richly detailed environments, inventive art direction, and disturbing monster design, all feel like they are pulled from the more twisted nightmares of Tim Burton. The semi-mythological creatures you’ll face are truly some of the more bizarre things you’ll ever see, and they represent one of the few unique interpretations of mythological fiends. Levels are equally gorgeous, and have enough variety that combat won’t get old for some time.

That’s great too, because combat is where you’ll be spending a fair chunk of time. Once again, breaking with its genre conventions, you’ll be fighting nightmarish beasts in real time. As a sorcerer, you’ll have six slots to equip “offerings," or items whose power you tap to cast spells. Basic offerings can be boosted and fused permitting more uses and different effects, which adds a lot of diversity. There are ranged attacks, healing techniques, and plenty of moves that can open enemies up to additional attacks. Chaining techniques with those of either your AI or player companions will help you distract, stun, and ultimately kill any hellions that may cross your path. These combat mechanics can be elegantly subtle and remarkably satisfying, especially when other players enter the mix. The effect is to create a consistently engaging system that doesn’t get stale after only a few rounds.

Some of the larger foes will require a lot of work, great timing, and a fair amount of skill to bring down. At times, the difficulty curve can get pretty unforgiving, telling you that it’s time to either grind easier mobs or change up your strategy. Unfortunately, the linear nature of the game means that if you’re not strong enough to progress, you can’t really do anything but grind levels and gear. During the last third of the game, you’ll be stopping every other battle or so to backtrack and level.

Those frustrations aside, felling truly mighty leviathans never ceases to make you feel awesome. It can be frustrating to lose time and time again, especially when some battles run upwards of 15 minutes--but when you do finally get everything to click into place, you’ll see the fruits of your labor.

While all of this may be great fun on its own, teaming up with others, either friends or random folks online, really brings out Soul Sacrifices’ strengths. The dynamic changes quite a bit when you’re saving or sacrificing friends that actually know you and can punch you in the face or bake you cookies accordingly.

Humans are always better than AIs and having people with you that understand the game and can help come up with better, more complex strategies is much more fun than having a few damage-soaking computers blindly hacking away at a boss. The sense of camaraderie and teamwork is a powerful one and definitely the single strongest thing in Soul Sacrifice’s favor.

Soul Sacrifice is probably best described as an M-rated Monster Hunter; even with all of its nifty mechanics and unique art direction, at the end of the day, you’re still just chasing down evil things and looting their bodies. There’s a strong element of cooperative play with an excellent twist that will surely be the death of many a friendships, and plenty of character customization to build up your own magic-wielding badass. The game’s got plenty of great content, especially if you can convince a few others to take that step with you, but if you’re holding your breath for a great story, you’re almost certainly going to be disappointed.

Daniel Starkey has been writing about games for over seven years. His work can be found at Destructoid, GameSpot, ScrewAttack, and Extra Credits. Find him on Twitter @dcstarkey.