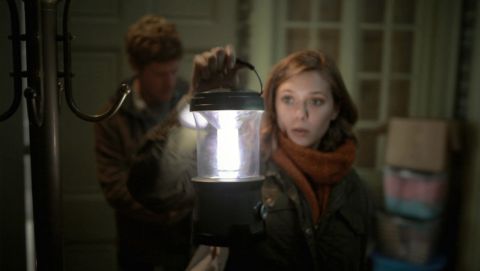 As such, it’s another intense riff on the horror genre’s favourite sadistic game: they can see you, but you can’t see them. Testing your nerves with the first fake jump after 15 minutes, Silent House knowingly shoehorns us into the scare-zone. Elizabeth Olsen’s Sarah, her dad (Adam Trese) and uncle (Eric Sheffer Stevens) are renovating a rundown house in the middle of nowhere.

It’s boarded up from the inside, lit only by battery hand-lamps and candles. Holes in the walls reveal something rotten. No kidding. Daddy goes missing and... thump . The title is a joke: it’s all about the acoustics of fear. Creaking doors, heavy breathing, whistling wind, tap-tapping, feet on wooden floorboards. It’s a great advert for carpets.

Gliding with impressive agility, the queasy HD lensing closes in tight and tracks Olsen’s petrified face, room to room. The big coat and scarf she wears soon disappear to reveal the blood-spattered white top of the horror heroine. As in her breakout Martha Marcy May Marlene , Olsen suffers superbly.

But the gimmick wears thin (as in the original) and it finally ramps into a twist that doesn’t hit the mark. Still, it’s brutally effective for a while and Olsen goes the distance. After the murderous cults and home invasions, surely this girl deserves a fluffy romcom now?