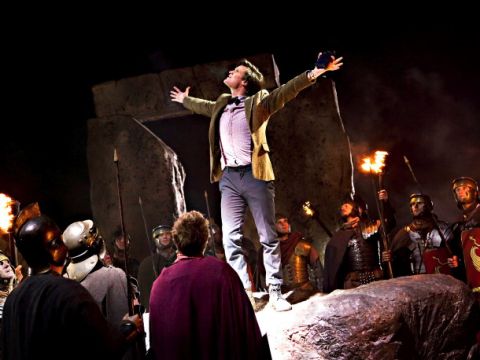 Our verdict on the first half of this year's Doctor Who finale...

THE ONE WHERE Amy and the Doctor travel to the oldest planet in the universe, and find that River Song has left them a familiar message. A previously unseen Vincent Van Gogh painting leads them to Stonehenge, where the Doctor’s arch enemies have joined forces to rig an elaborate trap.

VERDICT Steven Moffat’s first series finale has all the universe-ending peril we’d grown accustomed to in the RTD era, and plunges the Doctor into one of the worst situations he’s ever been in. That’s great news for the drama, because this is such a perfectly constructed cliffhanger that it’s nigh-on impossible to work out how he might escape – it’s going to be a very, very long week...

Uniting Daleks, Cybermen, Silurians, Sontarans, Judoon and many more in an unlikely, anti-Doctor alliance could feel like a desperate attempt to pander to fans (all those classic Who villains standing side-by-side would make a brilliant poster), but it works perfectly here because the series’ arc plot has been so cleverly constructed.The trap that the Doctors various nemeses have sprung for him is truly ingenious, a mystery so intriguing, using the contents of Amy's head as bait, that he was never going to avoid getting reeled in. That the Doctor might be responsible for all those cracks in time and space – and subsequently the end of existence – is a delicious twist, while the baddest beings in the universe putting their differences aside to save the day is even tastier. Besides, you've got to love the irony of the Doctor fulfilling his life’s work of bringing peace to the universe by possibly destroying the whole lot.

But luckily the episode isn’t all about the bombast, and some fantastically Star Wars -ish special effects. There's some great character stuff, with River Song (rapidly becoming one of my all-time favourite Who characters) getting a pre-credits prison break sequence that almost out-cools her entrance in “The Time Of Angels” – who’d have thought we’d see her on the blower to Winston Churchill? – while finding an even more inappropriate place to write “Hello Sweetie”. Forget "Geronimo!" That ’s this season’s most memorable catchphrase. Meanwhile, Amy and Rory (he was always going to come back, wasn’t he?) get some of their most touching scenes together, even though she spends most of the running time having no idea who he is. Indeed, the scenes of heartbreak they've shared this year have been some of the season's strongest moments.

The Doctor Who production team have said lots this year about their desire to make the show more fairy tale-ish, and never has that been more apparent than in this finale. The legend of the Pandorica and its contents has a real book-at-bedtime feel (especially when you realise its Pandora's Box origins), and of course, it makes perfect sense that the "most deadly being in the universe" should be the Doctor - for Daleks, Cybermen and lesser villains, he is the Big Bad Wolf. Now we're left to wonder whether this particular story will have a suitably happy ending, or whether it'll go somewhere altogether more grim. Next Saturday can't come soon enough.

TRIVIA Director Toby Haynes was at the helm for the first two episodes of Being Human .

DID YOU SPOT? There’s a real Indiana Jones vibe to the scenes where Amy, River and the Doctor wander around the cave under Stonehenge with burning torches – even down to the John Williams-echoing oboes in Murray Gold’s score.

DID YOU SPOT? 2 The Cyberman head sprouting legs and chasing Amy is a lovely little nod to The Thing : one for the kids, that.

NITPICK How does Roman Rory’s sword pierce a Cyberman’s exoskeleton when they can repel bullets? A rather perceptive kid asked this very question at this week’s Bafta screening . Moffat’s [very tongue-in-cheek] response? "If you had been paying attention, it was an extremely damaged Cyberman, a rubbish one with an entirely missing organic component. That’s why a sword was able to go through it. Normally that wouldn’t happen with a fully functioning Cyberman, but one that’s recently lost its head and only got one arm is reasonably soft in the chest area." So there.

BEST LINE River Song: "I hate good wizards in fairy tales. They always turn out to be him."