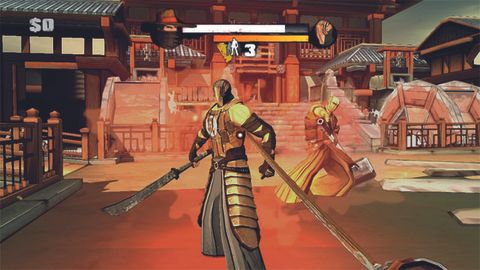 Forget Red Steel. The first one, that is. It was a heavily hyped mess rushed out for Wii’s 2006 launch, one that failed to deliver on all its promises (precise aiming, intuitive swordplay, competitive graphics). Its deficiencies put the first of many dark clouds over Wii's third party offerings, making the prospect of a Red Steel 2 less than enticing. But that’s exactly why you should forget the first, as this completely overhauled sequel is easily the best FPS on Wii and a wonderfully shocking example of how damn good a Wii-exclusive shooter can be.

Before we get into the story, or the lovely old west visuals or the moody soundtrack, we have to start with the kickass combat. As an FPS, most of the game is spent shooting and slicing enemies, but instead of taking cover or simply holding the trigger down until the bad guys die, Red Steel 2 forces you to use all of its diverse sword attacks, each of which is activated by a different flick of the wrist or swing of the arm.

We know, that sounds awful. But it’s not. This is probably the first action game on the system that uses motion for great effect, enhancing gameplay to a point that’s simply not possible with a standard controller.

Above: Pop a guy into the air with a vertical flick

Above: Leap into the air after him, slashing while he floats

Above: Then send him crashing back into the ground with a downwards thrust

Above: Oh hey, there was a guy waiting behind you – a simple button press and horizontal slash one-hit-kills this sneaky baddie

Above: Another guy tried to rush you head on, easily dispatched with a knockdown attack and then run through

Above: And then the last guy gets his neck broken. Boom, you just killed four guys in one minute, with all the flair of an anime superstar

About four hours into the game, you’ll have a wealth of sword moves at your disposal. The devs knew how outstanding their combat was, so it’s easy to purchase and upgrade each of these devastating abilities to their fullest. With so many motion-specific ways to dispatch enemies, it’s the most empowering sensation we’ve had on Wii. The combination of button presses and gestures is definitely not for the casual – this is seriously hardcore, with a generous number of combos, finishers, counters and sidesteps, each necessary to claw your way through the game’s remarkably capable thugs. Mapping this many moves to a controller just doesn’t seem feasible.

In fact, the combat is so well done that we can’t really make the age-old complaint of “even with all these moves it’s easier just to waggle the remote until everything dies.” Foes raise their guard and constantly alter their stance, forcing you to mix things up. It’s hard to convey in words, screens or even video, but trust us, when you clear a room of 13 enemies without taking a hit, you’ll understand.

It’s not 100 percentflawless though – despite several targeting configurations, we couldn’t find one that always kept us facing the enemy we wanted, leading to a few deaths we feel were unwarranted. Furthermore, the distinction between weak strike and strong strike is literally how hard and wide you swing. This means you need plenty of space and can’t relax while playing, so those with a fear of excessive Wii-waggle will need overcome their phobia. Plus you have to endure plenty of in-game reminders of how to play.

Above: Right, I know

Har har, an easy target for sure. But the lessons are well taken, because they explain the most crucial aspect of the game. And at least they’re better than the original game’s tutorial images.

Above: Remember these idiots?

Now then. How about the rest of the game?