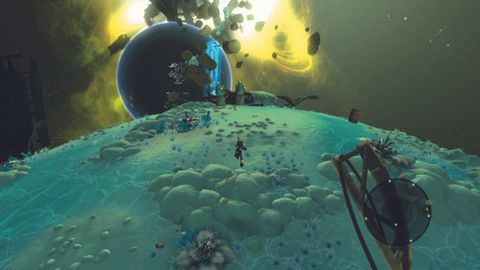 For the first time in their career as saviors of the universe, Ratchet and Clank have been separated. But the time apart has done them good. This is Insomniac’s most confident game to date, bursting with flair and imagination. By dividing the duo they’ve been able to create two boldly different games in one – a free-roaming space adventure and a brilliantly designed time-bending puzzler. But at the same time, they’ve kept intact the elements that made the series so popular in the first place; namely the humor, the platforming and the outlandish weaponry. Tools of Destruction was near-identical to its PS2 predecessors in terms of structure and gameplay, but A Crack in Time feels like a new experience.

For a quick story recap, check out our video:

Central to the new game is the Great Clock, a device built in the exact centre of the universe, designed to control the space time continuum. We learn that Clank’s late father originally built it, so he ends up becoming its caretaker. Not only has Clank been liberated from Ratchet’s back as his sidekick, but his role in the story has become much greater. Guided by friendly robot Sigmund (the junior caretaker), Clank’s sections see you traversing the giant whirring gears of the Great Clock and learning how it works. And this is where A Crack in Time’s puzzle elements come in.

By activating ‘time pads’ you can record yourself for up to a minute. This copy can then be played back independently of itself while you do something else. The simplest example of this is opening a door that’s unlocked by standing on a pressure sensitive switch. You record yourself wandering over to the switch and standing on it, then play it back while your actual self runs through the door. All controls are accessed on the time pad. This brings up a circular menu with options to record, delete a recording, or even skip the puzzle entirely at a cost of several thousand bolts. There are also, mercifully, hints for each one too.

Now, imagine this but with the multi-level complexity of a Portal puzzle. Later levels have you orchestrating four or five copies of yourself, all of which have to be perfectly synchronised. And the satisfaction of completing one is compounded by the shower of bolts you receive – Ratchet & Clank’s ever-present currency, which is spent on buying new armour and weapons, and upgrades.

Clank, however, only has one weapon: the Time Scepter. With this he can kill small enemies, but more importantly fire a ‘time bubble’ that slows down anything that falls inside it. For example, if a platform is spinning rapidly and you can’t jump on it, slow it down and leap across before the time bubble bursts. When it’s about to disintegrate you hear an alarm ringing. You can also repair things on the Great Clock with the scepter, like cracked screens or burst pipes. All you have to do is whack them.