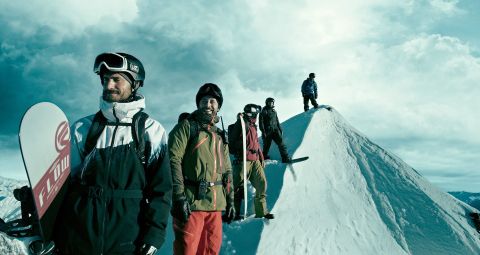 An enjoyably dopey actioner best viewed as a homage rather than a remake. Not a barrel ride, but no wipeout either.

News that Warner was rebooting Kathryn Bigelow’s seminal 1991 surf actioner was never going to be greeted with enthusiasm. Then it looked worse when Gerard Butler might be chewing his way through the role made famous by Patrick Swayze.

But Butler jumped, Édgar Ramírez stepped in and it looked a slightly cooler proposition. But even then, does the still-stellar Point Break need a retune? And can it possibly improve on the Reeves/Swayze bromance?

Well, no. But it doesn’t totally crash and burn either. This is a boneheaded, big, stupid movie rammed with eye-saucering ‘real’ action and almost knowingly dumb dialogue (the title is condensed to a particularly clunky speech about ‘reaching a point where you break’). It updates the original in a ham-fisted manner and gapes with plotholes big enough to surf through.

Updated for millennials, Johnny Utah (Luke Bracey) is now a poly-athlete into extreme sports who’s inexplicably joined the FBI because his bestie motorbiked off a cliff. He susses that a group of anarchists/robbers are actually adrenalin junkies seeking enlightenment by following a path of ‘ordeals’, the so-called Osaki 8 (extreme surfing, skydiving, proximity flying, snowboarding, free-climbing, street fighting, eating lunch up a mountain or something), and goes undercover to bust them.

Of course, you know this story: Utah becomes enthralled by charismatic leader Bodhi (Ramírez) and finds himself morally torn and along for the ride(s). Not updated for 2016 is poor female representation, with Teresa Palmer’s manic hippy pixie providing little more than bikini shots and a nice dinner.

But hey, this is all about the bros, man. And while Ramírez does sterling work selling a load of cobblers with considerable magnetism – the rest of the crew are dispensable – the standout stars are the real-life X-athletes who pull off the audacious stunts against a stunning global backdrop.

Like an extended Red Bull promo filmed with GoPro, we’re inside the action as they wingsuit alongside sheer cliffs, surf a monster wave, dive from a plane into an earthbound cave and dangle from vertiginous crevices. OK, so that Bodhi/Utah face-off so memorably parodied in Hot Fuzz is fumbled, and none of it really makes sense. But as action no-brainers go, it’s silly, entertaining stuff.

An enjoyably dopey actioner best viewed as a homage rather than a remake. Not a barrel ride, but no wipeout either.