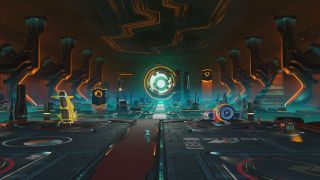 No Man's Sky Beyond is coming next week, and it's not just bringing VR support with it. Nope, developer Hello Games is actually offering three brand new strands of content with the major update, and as part of one of those we're getting new Destiny 2 Tower-style social spaces and the ability to create fireteams – essentially group of players banded together to aid in adventuring and exploration.

"It's about getting more players into the experience," explains Sean Murray in an interview with GamesRadar's own Josh West. "There is this social space, which is the Nexus, which is actually this huge space. You just summon it in; you fly into it, and then you meet up with other people. Anyone that you see in the Nexus will be someone that you can see and interact with. It's a bit like The Tower in Destiny."

"If you're going with people that you know, that you're in a Fireteam with – the people who you are in a group with – then you all go to the same Nexus. So no matter where you are [in the galaxy], you can just summon this in and go and meet people and chat to them, all with no loading screens – there's a bit of weird little magic going on."

That's the kind of magic I can really get behind, after all No Man's Sky's world is reaaaaally, really big. The ability just to warp to each other with the use of this Nexus space is a great idea. You can already warp to each other by joining your friend's game, but it sounds like this will work much more like Destiny – carry on whatever you're doing in your game, and drop in with your mates when you want to.

"You can see all the ships, you can see their appearance and see their emotes, their weapons... that has a weird impact on the game. Like a surprisingly big one where you now really care about your ship or how you look or you know, getting the latest... you know, whatever helmet... whatever it is, it."

But it's not just about hanging out with your friends. It seems the Nexus also acts as a hub for enhancing your game, similar to how the Space Stations work. "There are shops there, there are missions that you can go on, and mission givers in there as NPCs, and there are hangout spaces too."

"There's a teleporter, which sounds small but it is probably one of the biggest features. You can just go up to it and it will show you everyone else's bases who are in the Nexus with you or it will show you featured bases. So you can just go and find a really cool planet, set up a base there, and take a screenshot and people can go and visit that."

"For [featured bases] we have the concepts of like most visited, hours that have been played for, all that kind of thing. So there's a real user-generated content element to it. If you look at our Reddit, that's all people use it for – just posting screenshots, that kind of thing. So that makes this really kind of impactful I think. Then there are multiplier missions; so you can just go up, start a multiplayer mission, other people can join you and you're now in a group, leave the nexus and go do stuff together. We are seeing really different behaviour from people now."

No Man's Sky Beyond launches on Xbox One, PS4 and PC on August 14.