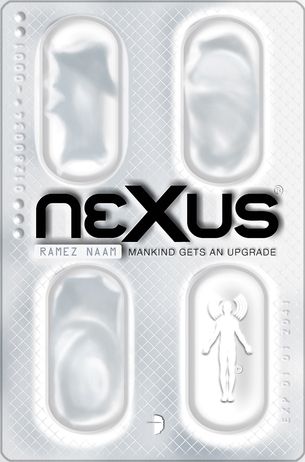 What would it be like to be able to link your mind to that of a fellow human being? If this ability was sophisticated enough, would you even be human anymore, or would you become a post-human creature? And what dangers and opportunities (for, hey, world peace) would arise from such an ability?

Such are the questions that lie at the centre of the debut novel from “professional technologist” Ramez Naam. It imagines a near future where a researcher, Kaden Lane, develops a nano-drug called Nexus 5.0 – think turbocharged ecstasy in its capacity for promoting empathy – that both worries and fascinates the authorities for the same reason: because it holds out the possibility of mind control.

Blackmailed into working for the US government and sent to Thailand on a secret mission, Lane meets others working at the cutting edge of such technology. He’s also thrown into a world of espionage for which he’s clearly ill-prepared, as the novel offers up a series of explosion-tastic action scenes interspersed with Buddhism-infused musings on the nature of what it is to be human. The limitations of technology feature strongly too: Kade’s attempts to programme himself as a Bruce Lee ninja boy instead of a geek make for a decent running gag.

At its best, this all works splendidly, as Naam displays a Michael Crichton-like ability to explain cutting-edge research via the medium of an airport techno-thriller. However, the uneven pacing gives away the fact this is a debut novel.