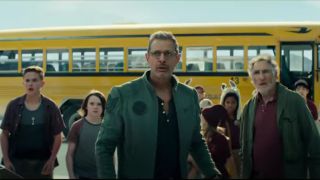 A new trailer has dropped for Independence Day: Resurgence featuring Will Smith, but before you get too excited, he's only in photograph form. The new footage, released for Earth Day, definitely emphasises the human element of this alien disaster movie with the relationship between Dylan Dubrow and his lost father, Captain Steven Hiller, leading the way.

A grown-up Dylan looks at a picture of himself with his Mum and Dad (still in his army combats) before Jeff Goldblum’s David Levinson tells him, "Your father was the bravest man I’ve ever seen." Check out the new trailer below...

As you can see, it's not just Dubrow's relationship with his Father that's explored here. We also get a look at what things have been like for former President Thomas J. Whitmore and his daughter since the events of Independence Day. Liam Hemsworth's query over his girlfriend bringing her Dad to the anniversary ceremony has got us thinking that he's not been in her life as much as she'd like. Well, he did have a pretty stressful term of office.

Besides all the heart-felt human exchanges in the trailer, we also get a boatload of new action-packed footage. Some of it we've seen before, some of it is much, much worse. The message is clear, just beause we won 20 years ago, don't think it's going to happen again.

Also, Earth Space Defense Director, David Levinson, (aka Jeff Goldblum) has recorded an important how-to guide for saving Earth. Check it out below.

Directed by Roland Emmerich and starring Liam Hemsworth, Jeff Goldblum, Bill Pullman, Judd Hirsch, Vivica A. Fox, Brent Spiner, Charlotte Gainsbourg, and Jessie Usher, Independence Day: Resurgence releases in the UK on June 23, 2016 and in the US a day later.