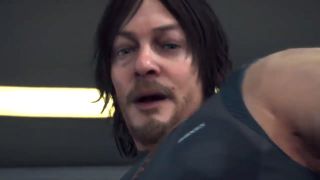 Death Stranding is full of cutscenes - anybody who has played a Kojima Productions game before could have told you that even before it came out. Lengthy cinematics packed with expositional dialog and landscape cinematography are what we all signed up for. But one cutscene in particular has proven particularly grating for dedicated players, so Kojima Productions is finally giving you the option to turn it off.

The cutscene in question is the one that plays every time you encounter BTs out in the world: Sam stops in his tracks, the camera zooms in on his Obradek scanner as it slowly deploys and does a twisty calibration dance, then the camera zooms back out. It takes about 10 seconds in total, which is fine at first. It gets pretty old by the 20th time you're just trying to lug some deliveries through BT territory and you still have to stop and watch your Obradek do its thing.

The new update, which went live today, allows you to effectively turn it off with a new option in the settings menu. It will still play the first time, but after that it will automatically be skipped whenever you get close to a BT.

【News】There is an update for #DeathStranding launched today! The update now enables you to change the settings to not have the effect when you encounter the BTs every time. Make sure to change your settings from the title screen to do so. #TomorrowIsInYourHands pic.twitter.com/9J4k2hc0CsJanuary 31, 2020

You'll need to stay a little more alert to make sure you catch your scanner popping up before you blunder right into a BT, but it could be worth the tradeoff just to avoid all the interruptions. Especially if you're trucking along in a vehicle and you would have had to slam to a stop otherwise.

Other popular fan requests for Death Stranding updates include a photo mode and a music player for use out in the field, so hopefully Kojima Productions has some plans to deliver those in the future as well.

See what else could be coming with everything we know about Death Stranding DLC.