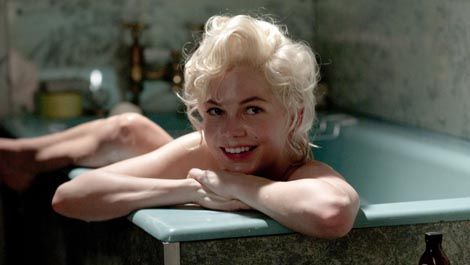 “Shall I be her?” whispers Marilyn Monroe to her young British confidant in My Week With Marilyn as she prepares to vamp and pout for a line of expectant fans.

It’s an aside that suggests it was as much a challenge playing Hollywood’s blondest bombshell for the girl herself as it must have been for Michelle Williams, the actress bringing the tragic legend back to life in Simon Curtis’ nostalgic period drama.

True, at first glance the Blue Valentine star’s physical resemblance to Norma Jean isn’t exactly uncanny. Yet she captures all of her trepidation and vulnerability as Marilyn journeys to prim ’50s England to appear in The Prince And The Showgirl with director/co-star Laurence Olivier (played to the hilt by Kenneth Branagh in one of several delicious casting coups).

Taking a shine to Colin Clark (Eddie Redmayne), the naïve assistant director upon whose memoirs the film is based, the flighty Monroe uses him as her go-between, companion and (ahem) rather more.

Back at Pinewood her tardiness and sickies send Larry doolally, as does the presence of her pushy acting coach Paula Strasberg (Zoë Wanamaker). “We can’t have two fucking directors!” Olivier seethes at one point, likening teaching his leading lady to act to “teaching Urdu to a badger”.

The Prince And The Showgirl was released in 1957, and it wasn’t great cinema – and neither, truthfully, is Marilyn . Televisual in style and modest in scope, it occasionally looks as ill-suited to the big screen as its subject felt in the company of revered co-star Dame Sybil Thorndike (Judi Dench) or her playwright husband Arthur Miller (Dougray Scott).

What it is, though, is witty, affecting and hugely entertaining, with scripter Adrian Hodges mining the culture-clash scenario for all its comedic worth. In a terrific ensemble meanwhile, Emma Watson gives good cameo as wardrobe mistress Lucy, who’s rather saddened to find hers aren’t the pins Colin’s interested in.

And yet, in the end, it’s Williams around which the pic revolves. And she’s nothing short of heartbreaking, showing us MM at breaking point – a walking wreck reliant on flattery, pills and the comfort of strangers. Not only that, but she also does a decent imitation of her singing voice, in fine recreations of ‘Heat Wave’ and ‘That Old Black Magic’. Boop-oopa- doop indeed.