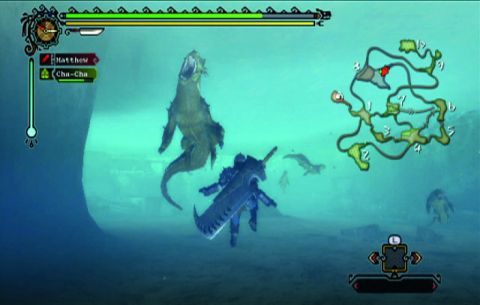 Monster Hunter fights last up to 50 minutes; 50 minutes of full-on claw-evading, potion-swigging, monster-cleaving concentration. Fingers Riverdance over buttons, rolling and leaping. Eyes dart for safe ground, hungrily searching for the five seconds needed to sharpen a dulled blade. Gobbling meat claws back in-game stamina, but does nothing for your own, sapped after nearly an hour of constant action. As the Classic Controller Pro threatens to slip from your moistened palms you ask yourself: outside of Wii Fit, when did you last break a gaming sweat?

Monster Hunter Tri is a hands-on role-playing game. It has all the variables of a Dragon Quest or Pokemon, but none of the distance. Everything is here and now and in your hands. Stats don’t whirr away under the hood. Hits count when they connect. Potions are drunk if you find time to drink them. By all means craft a defensive blade, but the description means nothing if you don’t time the block. Think a monster would be safer sans teeth? Better sock him in the jaw, then. This is a manual RPG, freeing actions from a menu selection. What menus there are exist in real-time; monsters pause for no menu.

Not that Tri feels like any other third-person action game. Although it revolves around decidedly videogame-y concepts of evading and stabbing, Capcom make them awkward, almost deliberately oblique. Go in expecting the immediacy of Devil May Cry or Ninja Gaiden and Monster Hunter Tri chews you up and spits you out. Hunters handle sluggishly, a bit like armoured men hefting eight-foot swords. Which they are. Capcom aren’t here to make you look cool, but to test hunterly mettle. The emphasis on dodging and precise attacking is reminiscent of old-fashioned boss design. Beating Wyverns – Tri’s big creatures – is pure pattern recognition.

Tri also has seven combat systems in one; such is the gulf between weapon classes. With quick attack animations, the sword and shield ape traditional hack-and-slash. Contrastingly, great swords handle like cabers. You don’t swing them, you push them. Hammers force frightening proximity, hitting hard and close. And don’t get us started on lances. Our Monster Hunter-crazed Capcom rep calls it the ‘pro’s weapon’, but sticking foes with these overgrown cocktail sticks is like trying to eat fondue blindfolded. Fondue that can eat you right back.

Bowguns are relegated to their own paragraph. Handling with incredible precision (courtesy of a first-person sniper scope) they’re in a game of their own. Built from three parts – stock, frame and barrel – the collective weight of the three decides its class, altering its handling. Oh, and each of those three parts can be levelled up and developed along its own skill tree. Oh, and it fires 41 varieties of ammo. There aren’t even 41 varieties of ammo in real life. Tranquilisers, fire bullets, electric bullets, healing bullets – yes, it even fires anti-bullets. How did this game ever fit onto PSP?

Above: Water levels are a wonderful addition to the Wii version

But Tri’s double-edged swords are, well, double-edged swords. Initially, handling is horrible. A great sword chop is so slow that enemies often wander off by the time it lands. When the enemy in question is a tortoise-slow Aptonoth, this is embarrassing. But Monster Hunter Tri is about learning. Over time, monster behaviour becomes recognisable and attack strategies emerge. Experimentation introduces combos. Great swords – our personal pick – can both chop and shunt, barging enemies down for a second whack. And Capcom wisely hold back more outlandish weapons – a sword/axe hybrid – until ten hours in.

As pieces come together, and monsters come apart, enjoyment skyrockets. Take an encounter with a Great Jaggi – a frilled, pink velociraptor and Tri’s first Wyvern. Sprinting in, she covers ground like a toothier Usain Bolt. Side roll and she skids in the dirt, opening up her hind quarters. Up close, split-second rolls evade her tail swipes. Smaller Jaggi chip in and aren’t so lucky; big Jaggi’s shoulder barge smashes them, too. We’d laugh, but mom’s clucking yelp calls a fresh batch to her side. Health waning and stamina shortening (the bar shrinks over time), we turn to find a second Great Jaggi running in.

This is Tri playing it small. Later on you’ll fight fat-breasted Qurupecos, capable of calling fire-spitting Rathians to the fray. The stone-plated Barroth is such a hulking creature that even dropping his body into a sand trap leaves a protruding head three times the size of our hunter. Capcom hit us with giant leeches, bulls and fish. Claws and poisoned stingers are scary, but simple bulk does it for us. Nothing puts the fear of God into you like having ten tons of meat sprinting in your direction.