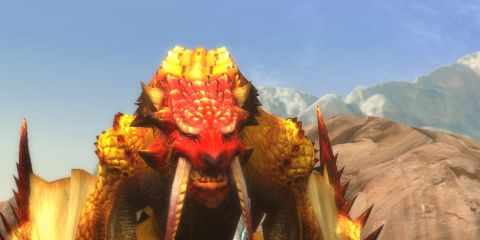 With the exception of online features, the 3DS version of Monster Hunter 3 Ultimate plays just like its Wii U counterpart. All the missions, monsters, and quests have been faithfully ported to the 3DS, letting you experience this robust game in 3D and play it anywhere you want.

The touch screen mimics the feel of playing it with the Wii U GamePad, and does a smooth job of recreating the same shortcuts and customization as its console counterpart. Because the 3DS lacks a second joystick, a D-pad panel on the touch screen lets you move the camera around with your free thumb. It may not feel as natural as playing with a Circle Pad Pro, but the touch screen’s responsive controls make it a good substitute for those who don’t have (or want) the extra accessory.

If you happen to own both the 3DS and Wii U versions, you can transfer your data between the two devices any time you want. It’s a shame, however, that this portable version doesn’t add a quick save option and still forces you to save in between quests. Additionally, the game doesn’t look the same as it does on your television screen, and suffers from grainy visuals and fuzzy letters in its menus and dialogues. Regardless, if you can dismiss these small blemishes, you will appreciate how faithful the game stays to its Wii U version, essentially giving you the same experience in a more portable and less expensive format.

For all it brings to the table, the 3DS version doesn’t have an online mode of its own, but does allow for local co-op matches. You can also recruit hunters from people you meet via StreetPass and send them on quests to look for resources. This gives it a few features the Wii U lacks, but doesn’t replace the immediacy of playing with others. If you want to have actual online quests without dishing out an extra $60 for the Wii U game, you’ll need to purchase a separate LAN adaptor that tricks your 3DS into connecting to Wii U servers to play. This tedious workaround won’t give you full access to online features, so getting online with the 3DS becomes more of a hassle than it should.

When it’s time to decide whether you’ll purchase Monster Hunter 3 Ultimate for 3DS or Wii U, you have to ask yourself: What’s more important, portability or online functionality? If you choose the latter, you’re better off buying the Wii U version of the game as it gives you everything the 3DS one offers and more. Still, you can’t go wrong in picking up the 3DS version, as it’s an impressive example of how much content and depth can go into one little 3DS cartridge.