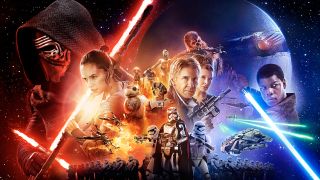 You might think you know Star Wars inside-out and back-to-front, but is it literally your job to know every midichlorian-sized detail? It is for Pablo Hidalgo, professional canon master of the Lucasfilm Story Group. He keeps tabs on the story and universe, ready to offer advice when questions arise about what’s canon and what’s not. With enough facts about the Star Wars universe rattling around in his head to fill the Deathstar twice over, our sister publication SFX magazine sat down with him to ask what it’s like to be a walking Star Wars encyclopedia ahead of the release of Star Wars: The Last Jedi.

So who decides what becomes canon?

It’s case-by-case. In general, each storyteller gets a chance to define to what level he or she wants to define in their own chapter of Star Wars storytelling. In the case of Rogue One, it was a very collaborative process to arrive at the final story that appeared on the screen. But when it came to the tiny details, I would work with co-producer John Swartz to figure out what expansions would require further input from the filmmakers, and what they felt I was free to define. Contrasting examples would be, does anyone care if I name Raddus’s warship the Profundity? No? Good, that’s what it is. On the opposite side, the backstory of Krennic and Galen was something everyone worked on together to map out and define for further exploration in publishing.

How do you decide what to name new characters and objects?

Again, it’s a mix. Whenever possible, I pull from whatever inspired the costumers or creature shop or prop designers or whoever was responsible for creating an element. Visiting the set and talking to the artists who created them is incredibly helpful. I try not to etch something in stone until the movie is further along in postproduction and we can be assured a particular detail won’t change.

How do you create a brand-spankin’ new Star Wars name?

It is primarily phonetic. Does it sound Star Wars-y? There’s no standard formula. In some cases, I may take an actor or performer’s name as a base, but it’s never as simple as spelling a name backwards. Toby Hefferman, who was an AD on the movie, played a rebel pilot named Heff Tobber. You can see bits of his name in there.

What was your favourite addition to the canon from Rogue One?

I wove a story thread about the surgically altered inhabitants of Jedha city that the Creature Shop created, and the kind of lowlife criminals who do such a thing and the bounty hunter who is searching for them. It ties into the Dr Evazan/Ponda Baba cameo in the film, and brings back their old 1989-era background into our storytelling.

Was making Rogue One lead seamlessly into A New Hope difficult, and were you trying to surprise us?

Not at all. That was the fun part. Having new characters and new perspectives provided the surprises.

Is it tricky sticking to George Lucas’s vision now he’s no longer involved?

We benefit from having people who worked very closely with him over the years to remember his tenets and sensibilities.

Is it satisfying being given (almost) free reign to fix plot holes?

Not for its own sake. Only if it comes organically out of the story we’re trying to tell, as it did during the development of Rogue One. It’s better to have in mind what kind of story you’re telling, what’s the human message, and who are the characters and what drives them, than to start with a small point of trivia and work outward.

Do you have anything you’re itching to fix or explain?

Not really, though I would like to finally clarify that the Bothans never stole any Death Star plans. Not make a story about it, just call attention to what’s in Return of the Jedi, because the lead-in to Rogue One drew a lot of attention to a basic misunderstanding. The Bothans just provided information on the Death Star’s location, status and that the Emperor was to visit; Mon Mothma never once mentions plans. That hologram the rebels looked at weren’t plans – blueprints wouldn’t show an incomplete Death Star as if the Empire never intended to finish it.

You’re the one who named Pruneface as Orrimaarko. Do you think every Star Wars character has potential?

Absolutely. Though, sometimes that potential is just to be a bit of colour. Not everyone has a galaxy-shattering story in their background, but everyone could be interesting in their own little slice of the world.

What’s your favourite unexplored era in the Star Wars timeline?

It’s whatever we’re working on at the time.

Are there any Star Wars stories you think shouldn’t be told?

There are certain things that George Lucas chose not to demystify that I think will always be kept under wraps. Like whatever species Yoda is doesn’t need to be defined, I think.

Have the fan and professional sides of your brain ever clashed over canon?

I recently did the math and came to the realisation that I’ve been working professionally on Star Wars for half my life. So, I think both sides have definitely merged at this point.

Read more about the Star Wars universe - plus extra sci-fi news, reviews, and features - in the latest issue of SFX magazine. Pick up a copy from your local newsagents or subscribe so you never miss an issue.