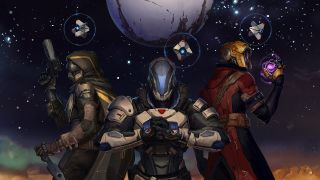 As with so many things on the internet, it started with a very good dog. More specifically, Stacey wanted a pet for her Dungeons and Dragons campaign. Your standard Labrador wouldn’t do the business, though. Stacey, known online as Good Game Kitty, had her eye on something more exotic - Destiny 2’s Warbeast. Although it may not jump to mind as an example of man’s best friend (it’s all teeth and a predisposition for chewing on your fleshy bits), she felt that the Cabal attack-hound deserved a second chance with custom rules of its own.

The problem is, you can’t keep a good idea down. Her literal pet-project started picking up internet steam like a time-consuming snowball. By the time it stopped rolling, she was left with something that draws in almost $1,700 a month via Patreon, fields a full development team, and has seized the imagination of thousands around the world. Enter Dungeons & Destiny, an ambitious love-letter that’s bringing Bungie’s world of Guardians and Ghosts to tabletop.

Attention to detail is where things escalated. Because a tweaked D&D wolf wasn’t good enough for Stacey; she felt that her alien canine needed special rules to do this video game adaption justice. And why stop there? “If I'm gonna make a Warbeast, I kind of want to make a Gunslinger [as well],'' she explains. “I think that'd be super neat. So I'm gonna need to make some fire mechanics and I guess I'm going to have to do Light abilities too. And then next thing I know, about a year later, here we are. Significantly extended!”

“Here” is more impressive than Stacey, now D&Destiny Director, makes it sound. Her Warbeast kickstarted an adaptation that has involved over 100 people in its lifetime. It also features three rulebooks crammed with stats and custom artwork you can download for free via the D&Destiny website. Stacey describes the process as a deer-in-headlights moment. Working in a gas station at the time, and “trying to figure out what the heck to do with the rest of my life”, the longtime Destiny fan didn’t anticipate this being anything more than a hobby. Even after the community encouraged her to set up a crowdfunding page, there was no expectation of anything to come of it.

“Then Jason happened,” she says.

The Jason she’s referring to is Jason Schreier, Kotaku News Editor. After he wrote a story on the project in July 2018, the pledges started flooding in. “The Patreon basically exploded overnight,” notes Phoenix, Assistant Production Manager. In fact, their budget skyrocketed from a few hundred dollars to almost one thousand as a result. What’s more, community members began offering their help in droves - D&Destiny’s testing pool went from 20 people to around 400 in a matter of days. It had obviously connected with players in a big way.

Why, though? And why translate Destiny to pen-and-paper roleplaying in the first place? For Stacey, it’s all about providing choice. “I love seeing what happens when people bring their Guardians to life,” she reveals. “You play [the video game] as a Guardian, and you think of it as your Guardian. But you're still following the story the game has set up for you. When you come to a tabletop, it's your story. It's the story you and your friends, or whoever you're playing with, have all agreed on to go through together. There's just so much room for expression and creativity.”

The project’s Assistant Gameplay Developer, Flynn, agrees. He feels that their game can cover ground Bungie aren’t able to themselves. “I don't think Bungie from a business perspective will ever make a quest that is specific to an Awoken Guardian,” he says as an example. “It just doesn't make sense - you're alienating probably over two thirds [of your audience]. So [with the tabletop version] you can make things personalized to each player.”

Your imagination doesn’t have a budget, either. As Flynn points out, a tabletop Destiny would finally let you try out things like ship combat; things we’ve only been able to dream about until now. Art Director Charlie adds that it’s the perfect place for “potential emotional moments that you can't really capture in an FPS. A tabletop RPG will just lend itself to in this setting, which has a lot of these moments that are implied or otherwise exclusively detailed in the Grimoire cards.”

Getting to that point is harder than you think, though. You can’t just reskin Dungeons & Dragons and call it a day; there’s too much math for that. Namely, Destiny’s multiple weapon-types, classes, archetypes, legendary items, and perks combine for spectacularly complicated results that need loads of sums to translate. The team also find themselves crunching absurd numbers to make sure nothing becomes overpowered.

“Translating how firearms work has been, if you will pardon my French, a b***”, Stacey says. “You get this perk that's like, okay, bonus damage on reload. If we're going to translate this perk, we need to have a reload mechanic. But then if you're tracking every single bullet in your weapon, that's not exactly fun for an auto rifle. So now you're trying to figure out how to keep things simple, how to keep things straightforward, while still satisfying. It has been an adventure”.

That’s to say nothing of logical gaps you may not even realise need filling. For instance, are your Guardian’s shields tied to armor, or are they generated by Light-based magic? Can the Taken faction ride vehicles? Where is the Last City, anyway?

“We do try to stay fairly consistent with canon,” Phoenix observes. “But that’s quite difficult because there are a lot of gaps that we personally need to fill in. I spent six hours in Destiny 2 just getting killed by various things so I could put names to the enemy weapons.”

It’s this dedication to a good user-experience that sets D&Destiny apart. Take Charlie’s work; in addition to paintings that could give Bungie’s own a run for their money, the modular campaign maps she’s working on now put the player first and foremost. “That ties in a little bit more towards gameplay,” she says, “because then you're actually like, ‘hey, we’re gonna need this asset and it’ll need to be this big to fit the players on there’, and so on.”

Customisation like this is also representative of D&Destiny as a whole; the team have no interest in being prescriptive. “At every opportunity we try to say, ‘death to the author, long live the fanfic’”, Stacey adds. “Your game is your interpretation of the Destiny universe. If you want to be 100% canon, then by all means - it’s your game. It’s your fun time.”

That may be why D&Destiny has been embraced so enthusiastically. It’s an invitation to explore Bungie’s world in any way you choose, and the team behind it are committed to making a product worthy of the name. It shows; the pieces are in place for D&Destiny to become one of the best tabletop RPGs around. Even Bungie themselves have given the project their blessing.

Not that fans are in any rush to begin their journey. While there’s no firm release date yet, they’ve been nothing but understanding of the game development process. “We have a wonderful community,” Phoenix says, a point the rest of the team echo at regular intervals. “We’re very supportive of one another, and it's a nice environment to work in.”

Seeing such a positive relationship between creators and their fandom in 2019 is refreshing. In all fairness, they’ve come a long way together. What began as a passion-project has blossomed into something so much bigger, more ambitious, and infinitely more complicated… yet the love for Destiny that started it all remains at the heart of everything.

Stacey puts it best on the D&Destiny Patreon page: “Wow. Just -- just wow. This is not a goal I thought possible when I first dreamed this wild dream of mine. There is almost nothing I can do to properly reward this community for all the love and support that got me here. I hope that a special Ketch dungeon/raid, with unique exotics, weapons, monsters, and abilities, will somehow suffice”.

I have a feeling it probably will.