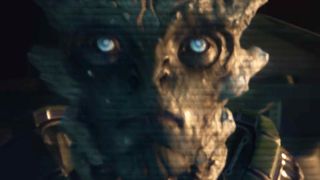 Mass Effect: Andromeda has a plan to deal with the most narratively incongruous part of the original Mass Effect trilogy. That is, knowing the Reapers are coming to destroy you and everything you hold dear within minutes, but feeling free to putter around and do three games worth of optional side content anyway. I'm Commander Shepard and this is my favorite way to waste time on the Citadel.

"So we want to have high stakes, and there are high stakes in the sense that if you don’t succeed in your role, that’s it for humanity, and potentially every other species that came from the Milky Way in Andromeda," Walters explained. "But we also don’t have to go right to raising the stakes to - you know, two hours in “hey, you’ve got this best friend and this best friend, which one do you want to die and which one do you want to survive?

"We don’t have to go that high, because the overall stakes are a little bit lighter in the sense that we want people to feel like they have the opportunity to explore, we want them to feel like, you know what, there’s this whole planet that’s got its whole separate story which feels tied to the critical path, but it’s not crucial to my success in the critical path necessarily. I want to be able to enjoy it, I just want to go off and do that, and not feel like I’m turning my back on people or humanity or anything like that."

The Reapers were a force of destruction that could not be reasoned with - once you knew they were coming, there wasn't much more to be gained from exploring their issues. The Kett, on the other hand, are a "nuanced" people who don't all necessarily desire the utter destruction of humanity.

"Clearly there’s some bad apples here, and you have to deal with them, but what does that mean for the rest of Andromeda? What does it mean for the other Kett?" Walters explained. "And we even have a whole separate storyline, we have these things called ‘b-stories’, because they actually traverse multiple planets and follow you throughout the course of the game, wherever you go. And one of them is devoted entirely to the main antagonist in the game, and some of the conflicts he’s even been having with his own people."

A few "bad apples", huh? I'm not holding out hope for a combat-free ending, but it would be pretty cool if we could turn Archon's own people against him before squaring off in the inevitable climactic duel.

Read more about Mass Effect: Andromeda and the future of BioWare in the latest issue of Official Xbox Magazine, on sale now. Buy future issues here.