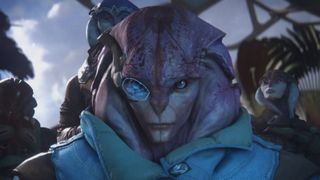 It looks like pre-loading is in effect for some of those who digitally pre-ordered Mass Effect: Andromeda on consoles. Some Xbox One owners confirmed the downloads beginning early this month while multiple PS4 owners found their pre-load had automatically begun as of this morning. EA still hasn't made an official announcement about pre-load availability for Andromeda, so we seem to be looking at a staggered release rather than a full-scale rollout right now.

Make sure you have at least 43GB free for all of those voice files and alien smooching animations to propagate across your hard drive.

Turned on my PS4 and the Mass Effect: Andromeda preload started. pic.twitter.com/g2WG0jZiRjMarch 14, 2017

Andromeda won't be out until next week so don't worry too much if your pre-load hasn't started yet (also, this is separate from the Play First Trial which will be available to EA Access members starting on Thursday, March 16). We'll update this article to reflect any official announcements about the pre-loading schedule from EA and BioWare.