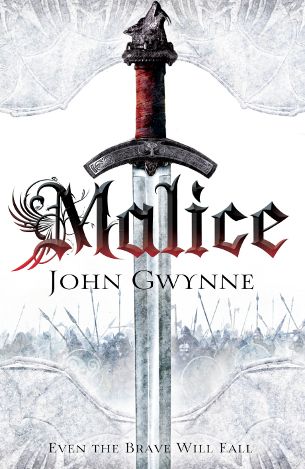 Malice by John Gwynne book review : The pages of Gwynne.

It’s exciting when you find a strong new voice ringing out through the halls of fantasy, and John Gwynne hits all the right spots in his epic tale of good vs evil, the first in the Faithful & The Fallen series.

Firstly, there’s his handful of main characters. Corban is a teenager, struggling to become a man, beset by strange visions and unaware of his future role in the imminent wars; Evnis is ruthlessly ambitious and pledged to serve Asroth, a dark god bent on destroying humanity; meanwhile, Kastell has to flee his home after years of bullying by his cousin turns into a deadlier game. There are more characters involved, of course, and they’re all drawn with copious quantities of vivid personality.

Secondly, Gwynne takes the familiar plot points of good/evil, hidden identities and magic and develops something fresh and imaginative. There’s a rich backdrop of lost civilisations and abandoned cities, overlaid with a remnant race of giants and the prolific but warring humans. All this is revealed slowly, the backstory blending smoothly with current events in an effortless writing style that appears easy but no doubt takes a lot of hard work to achieve.

That said, it’s not quite perfect. There’s some unnecessarily detailed repetition as characters retell events to each other, and there are too many characters having similar violent issues with family members. But there’s a lot of pleasure to be had in this debut novel; Gwynne is definitely one to watch.