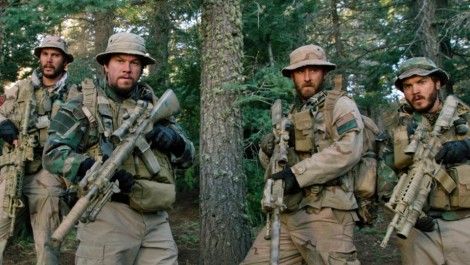 The low Oscar hum surrounding Peter Berg’s late hopeful poses a question: can the director of Battleship and The Kingdom make a serious film about conflict in Afghanistan? The surprising answer is “yes”, the less surprising caveat: “to a point”.

As for the “to a point” bit, the subtlety shortfall in Berg’s passion project – his attachment pre-dates Battleship – poses doubts that all his heavy fire can’t quite silence.

These strengths and weaknesses are implied in the routine base-camp opening scenes, which establish the SEALS as generic Good Men at work. So it’s to the cast’s credit that they manage to convey character through the clichés: Taylor Kitsch, Ben Foster and Emile Hirsch all stand out besides Mark Wahlberg’s central Luttrell as men mobilised to track Taliban big-cheese Ahmad Shah (Yousuf Azami) in hostile mountaintop terrain.

Once there, blunt moral decisions arise when a goatherd and two kids threaten to compromise the mission. the right choice is made, but it backfires when the Taliban arrive… and the world explodes for 45 minutes.

Bullets spray, bodies are flayed, ears are lost and bones shatter as Berg’s crew offload all they have in the staging. the cutting jars; the claustro-vision terrifies; the wound make-up horrifies; the sound mix is so L-O-U-D it even barges Steve Jablonsky and Explosions In The Sky’s overstated score off-screen. if you need reminding that “war is hell”, Berg serves it with unstinting first-person ferocity.

And if you need reminding of the broad strokes that marred The Kingdom , you get hints of those too. The SEALS’ corny slo-mo leaps frame them as good-guy martyrs and crudely stress bone-crunching thrills. The use of a David Bowie song in the climax (albeit in a mournful Peter Gabriel cover) implies notions of ‘heroism’ that feel misplaced.

An act of genuine heroism in the end stretch promises to deepen proceedings, but Berg’s portrayal of afghan villager Mohammad Gulab’s (Ali Suliman) bravery is too swiftly truncated. the mountaintop battle, meanwhile, goes on and on… to the point where Berg leaves us faintly numbed, gasping for the air of nuance.

The direction pummels and the cast impress, yet Berg’s war movie promises more than it delivers. Memories of Battleship are sunk, but that Oscar buzz may be a bit premature.