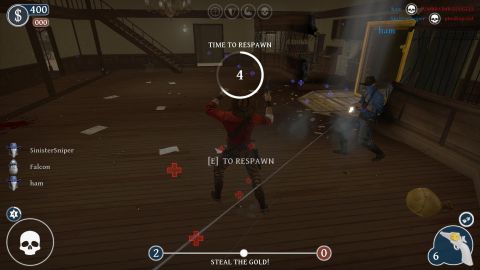 I have a brilliant financial plan: Games should be cost-adjusted to what they would’ve cost during the time they’re set in. You’re making a depression-era mafia epic? Price it at $2. Creating a caveman-themed, rocks-and-clubs beat-’em-up? That’ll be four boars. Star Wars RPG? 3,200 credits.

Lead and Gold is worth its weight in any currency. It looks and plays better than what I’ve come to expect from a $15 game; ask it to stand in the street with only its polish, lighting effects, gunplay and level design to defend itself, and it’d leave any other game in the third-person, team-based genre full of smoking holes.

That’s a terrific achievement - the looming goldrush of budget-priced shooters (looking to cash in on the success that Battlefield 1943 had) has a lot to learn from Lead. Its stripped-down feature set-six modes,six maps - makes it remarkably lightweight and the perfect shot in the arm to your action library, if you have room for a game that’s easy to pick up and put down.

You play as one of four old western archetypes: Trapper (a sniper), Blaster (a shotgunner), Deputy (a medium-range rifler) or Gunslinger (a pistoleer), all of whom are easy to learn and play. I love how well-animated these desperados are - Ihit the X buttonto leap over a ravine, then see the animation transition into a very Gears of War-like duck-roll as I hit the ground. Three enemies have gathered around a capture point, standing near it to lower my team’s flag and raise their own. I need to scatter them off the objective, so I use my Blaster’s special ability - holding L2 and pressing R1 to light a dynamite stick - and underhand it at them. Blam! Those that didn’t escape in time are blown clear off the platform.

Alongside loose gunplay moments like these, most of the excitement comes from Lead’s two unique attack-and-defend modes: Powderkeg and Robbery. In each, there’s a heavy object that the attacking team needs to carry: a bag of gold or an explosive barrel to destroy landmarks with. Robbery feels like gold rush rugby; relaying a giant pouch of precious metal like a football as you quick-roll through dust to dodge 19th century buckshot is a great feeling. Powderkeg lets you be a bastard as enemies try to carry large barrel-bombs into your base; try sniping the keg while it’s still in the hands of the player carrying it.

The “gangs” in Lead’s subtitle loosely refers to its teamwork-encouraging “synergy” system. Each character class has a passive trait that buffs teammates if they’re within a spit’s distance of one another, which provides an easily understood incentive for sticking with your compadres. Run and gun near a Trapper, Lead’s raccoon-capped sniper girl, and you’ll have a higher chance of dealing critical hits; hang with a Blaster, and you’ll have a bit better damage resistance. It’s a good idea, but Lead’s implementation lacks potency - I rarely noticed any character-specific stat-boost (aside from the generic proximity heal) from staying near my team.

Lead’s one significant disappointment is its lack host migration for multiplayer. If the preselected host among your session’s up-to-10 players quits, the entire game is lost. There's also no spitscreen at all, even for the co-op 2p mode. But Lead’s best asset is that it’s better than its cost. Let it be a side dish to your other shooter experiences, and it’ll be worth the sliver of gold it costs.