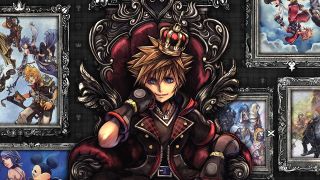 If you want the most possible keyblade battles for your buck, you need to keep an eye out for the Kingdom Hearts All-in-One Package.

Square Enix revealed the new release that will bundle together almost every part of the Kingdom Hearts saga today, from the first game all the way up through Kingdom Hearts 3. It's coming exclusively to PS4 on March 17 and it's only been announced for release in North America so far - pre-orders are already open at GameStop for $49.99 USD.

If you're a devoted Kingdom Hearts fan, you know it's quite an achievement to cram that much video game into one product. If you haven't played yet, this is the perfect way to get caught up on the series.To be specific, the Kingdom Hearts All-in-One Package includes everything that was part of the previously released Kingdom Hearts - The Story So Far bundle, and Kingdom Hearts 3. That's nearly a dozen entries in the series, though not all of them are full games of their own.

Here's the complete list of contents, broken down by each entry's place in the Kingdom Hearts franchise.

Square Enix recently expanded the story with the Kingdom Hearts 3: ReMind DLC on PS4 (it's set to arrive on Xbox One on February 25). It doesn't look like the All-in-One package will include ReMind, so its title is already not quite accurate... but it's not like there can be any reasonable expectation for Kingdom Hearts titles to make sense at this point.

See what else you could be playing soon with our guide to upcoming PS4 games.