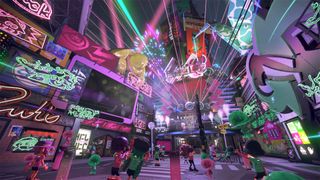 Roller coasters vs. water slides, cats vs. dogs, and ketchup vs. mayonnaise. These are just a few of the classic matchups that had players at each other's throats during regular special Splatoon 2 Splatfests.

They were invigorating nights full of intense fun and colorful displays of glow-in-the-dark ink that made Splatoon, and it's sequel Splatoon 2, feel alive. Now, the final Splatfest for Splatoon 2 is kicking off this weekend. It's the end of an era--celebrate it by jumping into the action right now.

Join Team Chaos or Team Order and fight other players in matches of turf war, whoever wins at the end of it will win some special snails that help you customize your gear. Nintendo tweeted about the final Splatfest earlier today:

"The #Splatoon2 #FinalSplatfest is here! Will you rage against the machine with Pearl and #TeamChaos, or band together for a new future with Marina and #TeamOrder? Put it all on the line, starting today until 7/21 at 5am PT!"

All you need to do is log into the game, go through the opening intro with the squid sisters, and then jump into the action. Ranked modes and other gameplay options are disabled, so it's all Splatfest, all weekend. We don't know if there will be a Splatoon 3 at this point, Splatoon producer Nagomi has said they haven't started production on it (although that could change in the future). This could be the last chance we get to fight in the colorful glow of each other's ink, so take the chance while you have it.