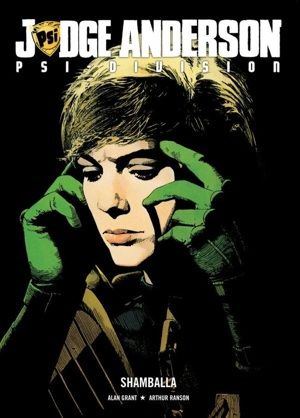 Cassandra Anderson has always seemed a better fit for the strange cases than many other Judge characters. It’s partially because she’s a telepath but there’s something about Anderson’s make-up as a character; her combination of pragmatism, bootstraps-up toughness and incredible compassion that makes her the perfect lead for this sort of story, and it’s these unusual, Fortean cases that are collected here.

“Shamballa”, the first story here, is also one of the standouts, teaming Cass with Psy Judge Amikov from East-Meg 2, as bodyguards for a pair of parapsychologists searching for the origin of the apocalyptic omens sweeping the Earth. It’s a neatly set-up story, one part Beyond The Mountains Of Madness , one part two-fisted pulp adventure, and it establishes a common arc for these stories; the impossible is out there, rich and strange and beautiful and at least as corrupt as the rest of the world. The story neatly combines action beats with tragedy and the start of Cass’ gradual disillusionment with her work. It’s a pivotal story and one that would only be built on as the year’s went past.

“The Jesus Syndrome” builds on this, with Anderson partnered with the aptly named Judge Goon to investigate a Christian revival cult. This is one of the places where you can sense, especially today, the characters sailing close to the wind, but it ends up being one of the most powerful stories yet told with the character. The head of the revivalists, Jon Baptiste isn’t so much a character as he is a mirror designed to show Anderson what she, and her city, are becoming. The fact that Anderson responds to this with sadness and violence only shows how far she’s fallen. This is also one of those stories where Arthur Ranson’s photo-realistic artwork really shines, the fight between Anderson and Goon a neatly choreographed example of what happens when bulk meets skill.

“Satan”, the story that follows it, was originally printed several years later, following a series of stories where Anderson had quit the Justice Department and was traveling through space. Newly returned, Anderson is on judicial review when an asteroid changes course and crashes just outside the city. What emerges from it is an obscenity; a 120 foot tall, marble-skinned humanoid who tells them that he’s Satan. As the Justice Department frantically works out how to go to war with the Devil, Anderson and Dredd are on the front lines and Anderson, again, is forced to confront her issues with faith. It’s a remarkable story, firstly because it plays more like contemporary horror than science fiction for much of its run and secondly because of Ranson’s extraordinary art. The sheer scale of Satan is driven home over and over again and some of the splash pages could have been torn from Dante’s Inferno as the extent of the horror about to be unleashed on Earth is revealed. For all this horror, for all her doubts, Anderson is still the one who stands on the wall and refuses to yield and the last couple of pages, a conversation with Dredd, show just how courageous she is, how much, for all her concerns, she’s still a Judge.

There are several other stories collected here; “Reasons To Be Cheerful”, “The Witch? Report”, “R*volution” and “The Protest” and they’re all excellent. This strand of Dred d-continuity has always been fun, but the stories presented here are within sight of being classics, focusing not just on the paranormal elements of Dredd ’s work but on the troubled, flawed and utterly sympathetic woman sent to face them. None of the stories here may be Cassandra Anderson’s finest hour – for me that will always be “Childhood’s End”, but they’re some of the best comics the UK has produced in decades. If you’re a fan, or if you’re coming to the character new, this is an essential purchase.