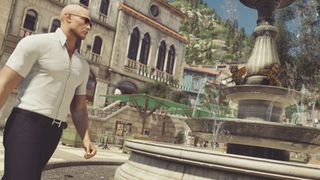 This article originally appeared in Xbox: The Official Magazine after the launch of Hitman Episode 2: Sapienza

Twenty six hours. That’s about enough time to run through the whole of Dishonored and maybe squeeze in a Call of Duty campaign or two. It’s also, apparently, how long I’d spent on the first instalment of Hitman, consisting of the Paris level and a couple of tutorials.

A statistic like that goes a long way towards vindicating the decision to release the game in episodic format. If I’d been able to gorge on the whole thing at once, I might have finished it in far less time and would never have uncovered Hitman’s layers of detail to the extent that I did.

So, with episode one pretty much wrung dry, it’s on to Sapienza, a level of staggering size and complexity. Where Paris was densely packed and clearly divided, Sapienza is a sprawling maze of narrow streets, punctuated by explorable buildings and dominated by a huge clifftop mansion that boasts its own observatory, crumbling castle ruins and secret underground lab.

It seems dauntingly huge at first, but the game’s preset opportunities provide a welcome lifeline. Following an opportunity in Paris sometimes felt a bit too close to reading an FAQ for my liking, but for the most part they seem better balanced in Sapienza, offering just enough guidance to get close to the target. From there, careful examination of the various objectives reveals numerous ways to branch out on your own.

To begin with, little is known about the two targets beyond that they’re involved in weaponising some kind of deadly virus. The personal details are revealed via exploration and eavesdropped conversations, to the point where, after murdering the pair of them a dozen or more times, I felt like I knew them almost intimately.

The first time I met Silvio Caruso I posed as a shrink and listened to dark tales of his mother, before smothering him with a cushion. Later I used that knowledge to terrorise him by invoking his mother’s ghost, at which point killing him was almost a kindness. Another time I delivered flowers for the old lady’s grave, watched Silvio weep for a while, then fed him into a woodchipper.

I became equally well acquainted with Francesca De Santis, setting up a tryst with her secret toyboy (who by this time was residing at the bottom of a cliff) before poisoning her champagne. I also informed her about Silvio’s creepy obsession with her, revealing a bag of her hair that he’d been hiding in a safe. She threw it into the fire, coincidentally at the same moment a leaky cylinder of propane fell down the chimney.

Sapienza is so densely detailed, it feels like a real labour of love from the developers. There’s a convincing solidity about it, a sense of place that few videogame locations manage to capture. Some areas are barely used in any of the objectives I’ve uncovered so far, but they’re fully realised anyway. There’s a little art gallery, a small shop that’s being renovated and numerous apartments to explore while the owners are at work. The church has catacombs that lead to sewers that lead to a hidden beach, while elsewhere you might find the mayor’s empty office or some shops and restaurants that are closed but explorable. They could stage a whole new level in the parts of this one that are currently just window dressing.

I’d say Sapienza marks a new high point for the Hitman series, but there’s one thing that lets it down somewhat. The third objective involves infiltrating the lab to destroy the virus, and after the vast replayability above ground, this subterranean section veers a little close to becoming a chore.

The first time I saw the cave, with its scientists working under armed guard and a seaplane fuelled and ready for a daring escape, it looked like a location from a vintage Bond movie. Unfortunately it’s riddled with people who can see through your disguise, making it play very much like something from the unloved Hitman: Absolution. It’s a tight area with a limited number of routes, and in contrast to the smorgasbord of assassination available in town, I soon settled on the quickest method, just to get it out of the way.

Repeating the lab isn’t something I look forward to, and although it’s possible to start the mission down there, save after destroying the virus, then reload from that point to play the ‘real’ Sapienza, this isn’t a tactic you’ll want to do every time since it affects events above ground.

Still, it’s forgivable. And, given the evolving nature of Hitman, perhaps even fixable. This might be Early Access by another name, but as a fan of the series since the very start, Hitman is already my personal favourite thing on Xbox One and is firmly shaping up to be (whisper it) better than Blood Money.