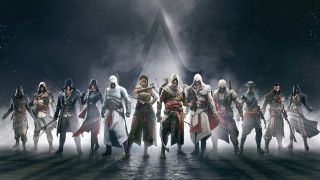 I know just enough about classical music, and what my septuagenarian parents like about classical music, to know that there was a good chance they'd enjoy the soundtracks to some of the greatest games of all time. With scores for Skyrim and Fallout appearing on mainstream radio alongside those for blockbuster films, the accessibility has never been greater, making it a clear avenue for me to try and share my love for video games with my parents.

And thus, I took them along to the Assassin's Creed Symphony in London. The music would be the gateway for us, but this would also be an extra opportunity to discover how successfully video game concerts can now tell stories and capture audiences, regardless of their familiarity with the games themselves.

While I had confidence that the concert's offering of on-screen visuals would help tell the stories of the games, the music itself would go a long way to set the scene. The High Seas theme of Assassin's Creed: Black Flag is clearly and immediately recognisable as 'piratical', for example, while the harpsichord-heavy tracks from Unity conjure images of the pomp of pre-revolutionary France to mind. It's this idea of music inspiring imagery that is something I wanted to give back to my folks, and my dad particularly.

A fond childhood and classical-music memory I have is of my dad narrating a grand Tolkien-esque story to the music coming out of our car radio: plucked strings were elves releasing arrows, triumphant horns marked the march of battle, and boomy timpani drums represented the stomping footsteps of trolls. He had conjured up an entire battle scene that felt as clear as day, all based on what we were hearing through the car's sound system. All these years later, and I wanted to see if I could return the favour, using music to tell some of my favourite stories to him in a similarly evocative and enjoyable way.

I had tried once before with PlayStation in Concert in 2018, and while it had manifested visions of the best bits from The Last of Us, Journey, and Uncharted, the music failed to deliver the magic. They stuck to the main theme of games, gave no information, and provided no visuals. I had confidence that Assassin's Creed would offer an easier entry point for my folks, with plenty of historical context, characters, and scenes to engage the eyes, all set to sweeping orchestral soundtracks.

In brief, the Assassin's Creed Symphony 'plays' the games in release order from the original title all the way up to Assassin's Creed: Odyssey, compressing their storylines into bitesize episodes of about 15 minutes. The visuals were a mix of raw gameplay and cinematics, collected and squeezed to provide an abridged version of the story, accompanied by a few selected tunes from each soundtrack. To supplement the experience, I put together a plot synopsis of each game to try and brief my parents on the whole series in advance.

The concert began with Altair, which was apt, of course, but also proved baffling for non-players. Even I struggle to remember some of the key plot points of the first game, and there's no massive real-life historical hooks to grab viewers in. Still, as a scene setter, it worked. The medieval-themed music was a good hit in terms of not putting my family off, and combined with my synopses, I think my folks were following along… just.

Assassin's Creed 2, meanwhile, began with that tune, otherwise known as Ezio's Family. Combined with the accompanying visuals showing off Florence's paradisiacal architecture, it was the highlight of the concert, the pleasant tunes complementing panning shots of synchronisations, meanders through the streets of meditteranean cities, and bird's eye views of sweeping landscapes.

When the Kenway Saga began with Assassin's Creed 3, the music of Connor's frontier journey was when I truly started to feel the goosebumps. The broadly clear storyline of Redcoats versus revolutionaries made for a clear yet compressed narrative to follow. The absence of one of my favourite tracks, Wild Instincts, however, seemed like an oversight, not least as a way to convey the tension between Connor's native American heritage and frontiersman upbringing. They did, at least, play the tavern-inspired song of Beer and Friends for an pub brawl scene and Dad's knee was bouncing in time with that one; a victory in my eyes.

From there, it was on to Black Flag, the music of which represents some of the series' strongest in terms of enriching game play. Black Flag's visual aesthetic, themes and characters make it as infamous as the piracy that holds it all together, where sailing the high seas and engaging in naval combat are easy for the audience to follow, especially when its High Seas track kicks into gear. However, the more obscure end-game scenes highlighted how the concert could use more information to ensure less familiarised viewers understood what was going on.

Rogue was a game I'd have liked to have spent more time actually playing with, boasting one of the most underrated soundtracks across all of Assassin's Creed. Despite some similarities, the score beautifully translates the story through music, its rhythmic pace and haunting notes mirroring the frosty winds of the North-Eastern seaboard.

Unity remains the much-maligned black sheep of the Assassin's Creed family, yet it's setting and music combined to create a really successful mini story in the concert. The upgraded and much changed game aesthetic, engine, and models made Revolutionary France instantly recognisable to my family, perhaps more so than the historical backdrops of previous games. Together with Syndicate, however, it was one of the more forgettable sequences, and both were whizzed through compared to other entries on the menu.

The climax of the show with Origins and Odyssey was one I had been looking forward to, as the former contains some of composer Sarah Schachner's best work; a mix of distorted electronics and string instruments offering a great companion to Bayek's travels. With Odyssey representing perhaps the most refined in-game experience, newly laced with RPG elements, the concert had a lot to work with. The imagery and music combination seemed to crescendo to these games, and the relationship between the two was very successful and some of the most memorable for all of us - Dad being particularly fond of the Greek setting, scenery, and architecture.

With the main games wrapped up, there were the inevitable encores. Notably, in the second or third encore, the conductor lent into the microphone and said 'How about some sea shanties?'. Pandemonium ensued.

The execution of the Assassin's Creed Symphony both works and falls a tiny bit short. The tunes and themes were scaled back in some ways due to genuine limitations of the operation: a trumpet instead of the haunting, travels-on-the-icy-wind soprano in Rogue's I am Shay Patrick Cormac, for example. But that's forgivable, as no live act is ever just ripped straight from the CD. It also goes to say that everyone – myself including – will have their favourite tracks, tunes and music from games. And so everyone will have a perfect way that a concert could be conducted. I think that there were definitely some great tunes that were left out, and those will have to remain at studio quality in my playlists.

Asking for my parents' thoughts afterward, Dad said, 'The music was generally "in tune" with the events portrayed, in that it didn't detract or divert by being more interesting than the images we were following, and seemed appropriately supportive of events being portrayed on-screen.

He also described an element of the music accompanying the environments well, in such a way that it "sounded encouraging", and would want a player to continue and explore more, almost to get a scenic or melodic reward from particular situations. This is genuinely good video game analysis covering landscapes, environments and music and therefore represents a genuine success of the concert to get a non player like my old man to think in such a way.

It remains, however, the fans that will still get the most out of this kind of experience. Whereas anyone can rock up and watch Gladiator with a live orchestra for the first time or the 100th time and have a cohesive, whole-story experience, Assassin's Creed is hours and hours of micro and meta narratives. It's therefore inevitable that some bits will not make sense to those coming in from the outside, especially since the stories aren't as linear.

Ultimately, this to-ing and fro-ing in my brain, trying to work out if it was 'objectively' a success or not, doesn't really matter, as it proved an enjoyable success for us. And parking the ruthless 'good or bad' appraisal to one side for a moment, I remember my dad saying that if he didn't like this one, he'd prefer not to go to anymore game-music concerts. I think he'll come to another now.