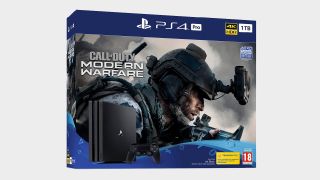 OK, this is one of the best cheap PS4 Pro deals we're likely to see - ever. And you'll want to get right on it if you haven't got one already, or would consider an upgrade to Sony's premium console: it looks like the price of the Pro has been slashed at multiple retailers in the UK, going down to about £250. The best offerings are at Currys, where prices across its PS4 Pro range have been slashed by a significant amount. This covers a broad range of bundles with games (really recent games) and the console itself in both white or black.

And there are some banging bundles to choose from; we've highlighted a few here. Probably the pick of the bunch is either the bundle with Death Stranding - an awesome, still-full-price, PlayStation-exclusive game - or the Call of Duty Modern Warfare bundle. The latter is one of the biggest games of the generation in a much-loved series. Both of these are down to £259, which is just silly. If you're a sports fan, then fear not - you can grab a FIFA 20 bundle for the same low price of £259. Considering the par price for these bundle - and the console itself - is usually £350, these represent a massive saving of about 100 quid. That's enormous.

A killer extra that seals these deals from Currys is that the tech retailer is throwing in 6 months of Spotify Premium with each and every one of these PS4 Pro deals. That is very much an audio sweetener if you were hesitating at all or looking for some extra bang for your buck. Game has also come in with some hot exclusive Death Stranding bundles too.

Limited Edition PS4 Pro + Death Stranding + Red Dead Redemption 2 + GTA V | £304.99 at Game
That's a serious amount of extra content in this PS4 Pro bundle deal. These are big games too, so you're really getting great value for money. When you want a break though, there's a two-month Now TV entertainment pass to enjoy some top streaming content.
View Deal

PS4 Pro 1TB console + FIFA 20 | just £249 at Currys
Sports fans unite! The same great price for the most recent iteration of FIFA. Such good value for one of the season's most popular titles.View Deal

Limited Edition PS4 Pro + Death Stranding | £269.99 at Game
Game is the only place in the UK you can get this unique PS4 Pro design. It comes with an exclusive themed DualShock 4 controller too. This was closer to £350 not so long ago, so don't miss out!
View Deal

PS4 Pro 1TB console + Death Stranding | just £249 at Currys
Again, this is a brand new game that sells for £50 on its own still. Thus, immense value here (Amazon is selling their limited edition version of Death Stranding in a bundle for a bit more - going for £269.99).View Deal

PS4 Pro 1TB console + Call of Duty: Modern Warfare (2019) | just £249 at Currys
This is a mad good deal with one of the best and most bombastic games of the year, and one of the biggest titles for PS4.View Deal

These are some great last minute Christmas deals to get PS4 Pro cheap. It's an excellent console with an enormous back catalogue of games and really would make a centrepiece for family and friend gatherings over the Christmas break. Remember, you could get even more out of your new premium 4K and HDR console set up with one of the best gaming TVs or best gaming monitors to really soak up those juicy visuals.

If you're on the lookout for something equally good on the other home consoles, then check out the best Xbox One X deals and best Nintendo Switch bundles.