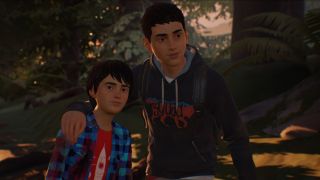 Life is Strange as a series has never been afraid to explore difficult subjects and portray issues that affect people in the real world. From cyber-bullying and racism to discrimination, the many different social issues explored throughout the series are, as lead writer Jean-Luc Cano tells me, "part of the DNA of Life is Strange." At the heart of Life is Strange 2, Dontnod's latest episodic adventure, homelessness is an ever present issue for protagonist brothers Sean and Daniel. It's through the game's depiction of homelessness that Square Enix and London-based charity Centrepoint are collaborating together for the We Will Be Heard campaign, which seeks to raise awareness about the services available to young homeless people in the UK.

Warning: some light story spoilers ahead

In the opening hours of Life is Strange 2 as Sean, you go from getting ready for a party and deciding whether to swipe your dad's beer, to being forced out onto the streets with your little brother under your care. After a confrontation leads to their father being shot by a police officer, the two brothers set off on a journey into the unknown. But, as you soon discover throughout the narrative adventure, that's easier said than done. After all, Sean is just a kid himself, but he's suddenly forced to become a guardian and mentor to his little brother, and has little time to process his own feelings of grief. In the shoes of Sean, Life is Strange 2 gives us a glimpse into the many challenges young people might face when they no longer have a place to call home.

We Will Be Heard

"In terms of our collaboration, Square Enix approached us," Paul Brocklehurst, the head of Centrepoint's helpline tells me. "They were looking for UK-based charities that tie into the issues raised in Life is Strange 2. We had a chat with them, played the game, and nearly snapped their arm off [to collaborate] because I think the game speaks so much to a lot of the challenges our young people face."

Through the storytelling in Life is Strange 2, and in our role as Sean, we're able to gain some insight into how it might feel to be a young homeless person with no one to turn to. Throughout the story, and the experiences you go through, I constantly found myself feeling very reluctant to trust any characters who appeared to offer Sean  any assistance. After experiencing so much hostility directed towards the two young Diaz brothers, you're constantly on edge and Dontnod does well to establish an ongoing tension throughout the narrative that makes you truly feel unsafe in what is often a very hostile environment. The tense atmosphere and emotive portrayal resonated with those working at Centrepoint, who had seen and heard of experiences like Sean and Daniel's first-hand.

"What we see a lot is that people at a very young age are all of a sudden having to make major decisions about what's safe or not, who to trust or not, where they're going to stay at night," Brocklehurst explains. "It has a massive emotional and mental health impact as well that I think is captured well in the game. You see that Sean's getting very frustrated very early on, because he doesn't really have the time to process the death of his father, he's too focused on 'how are we going to get through today?', and that mirrors a lot of what we see with people calling us saying they've been kicked out or they've run away from home."

"This game really resonated with us despite some of the differences in culture [since Life is Strange 2 is set in America]," Centrepoint's senior direct marketing officer Becca Cousins tells me, "because it gives people a very slight window into the very very difficult and complex decisions and experiences that young homeless people go through, which we thought was very powerful. And it means we can kind of draw awareness to what young people are going through in the UK and that we do have services and a helpline where we can offer advice, which is something Sean and Daniel didn't have access to."

In the first episode, you're presented with the choice to steal a tent, some candy bars, and an adorable hoodie for your brother, and these choices make it difficult to discern what is right and wrong, or if there even is a clear cut "right choice." Lead writer Cano explains that they hoped players would feel that the right choice isn't so well defined. "Some people will say that if you are stealing something, you're a thief and you're bad," Cano continues, "But when you're doing this in the shoes of Sean, you're stealing not for you, but because your little brother is hungry and because it's cold. So yeah, what am I going to do? Am I going to let him suffer or let him have it. No, I'm going to steal. It's the same in real life. It's not always black or white, it's always grey."

Sean and Daniel's story has such an impact because it enables you to take part in the experience directly, reacting to the narrative's unfolding events not as an observer but as an active participant. Just as we're given a window into the brother's experiences, it's through real young people's experiences of homelessness that the We Will be Heard campaign hopes to raise awareness about just how prevalent the issue of young people at risk of homelessness is within the UK.

We Will be Heard aims to highlight that over 22,000 young people will be at risk of homelessness this Christmas. Street art will be shown around London depicting silhouettes of young people and their stories, as well as portraits of some of the young people affected with elements of their stories shown. Those who wish to take part can also sign a petition for the campaign.

Just as Life is Strange 2 is able to highlight so poignantly in its story, many people in the real world are but one event away from losing everything they have ever known. Dontnod treated the story with the respect and research it deserves because the studio understands that its games are able to transcend sheer entertainment and can be used as an educational tool.

"As developers, as creators, we have a responsibility to do it well," lead writer Cano affirms, "so every subject we are dealing with in Life is Strange or Life is Strange 2, we do a lot of research for, we contact people who are facing these situations in their real life to be as accurate as possible. To be the most honest and sincere. Because for us, even if it's our baby and it's a video game, some people are facing these situations in their real life - in their everyday life - so we can't talk about it lightly. We have to be responsible. And yes, it's a massive responsibility, but it's the kind of game we are making and it's important for us to do it well."