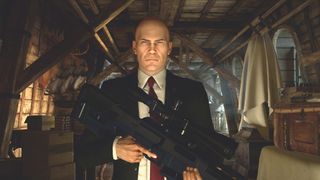 Hitman 2 was an exceedingly familiar sequel, but it was still a good Hitman game, and any movement from developer IO Interactive is still plenty exciting. According to a new documentary from Noclip, the studio is not only looking at Hitman 3, but also a new IP entirely.

IO Interactive opened a new studio in Sweden earlier this year. At the time, CEO Hakan Abrak said the addition of the Swedish studio would "expand our muscles for creating brand-new and exciting endeavors, new universes, new franchises." It seems folks have settled into the new studio and begun putting those muscles to use.

"While much of the team is working on new Hitman content and looking ahead to a third Hitman game - one that [Abrak] says 'may once again go episodic' - the majority of the studio, at least here in Copenhagen, is working on something secret, and rather excitingly, something new," journalist and Noclip narrator Danny O'Dwyer says around 37 minutes into the Hitman documentary.

"We are still very much independent," Abrak says afterward. "We're looking into the future with new things, potentially new IPs that we might be working on. We've created four original IP from scratch. Creating new characters and worlds and what not is part of our DNA. We're looking forward to bringing new stuff as well, apart from growing Hitman, into the world."

It sounds like Hitman 3 and IO Interactive's mystery IP are still very early in development, possibly even pre-production, so we probably won't see much of them until 2020 at the earliest. However, if Hitman 3 does indeed return to the episodic model of Hitman - the reboot, that is - we may get to play its first episode within the next few years.

You'd better believe Hitman is on our list of the best stealth games to play right now.