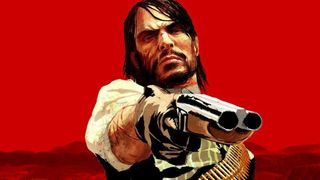 You might have missed it over the weekend but Rockstar tweeted this out yesterday:

That's it, nothing else. No name or info. Just the logo in red. Which it proceeded to put on EVERYTHING. Almost everywhere Rockstar lives online currently has that image.

The tweet went live without warning and everyone freaked out in unison which meant that for about half an hour everyone's timeline looked like this:

Twitter's going to be like this for a while... pic.twitter.com/sVDugjTuVCOctober 16, 2016

A fight broke out to make the same joke

Almost as soon as the retweet tidal wave subsided almost 99% of the human race tried to be different.

I've been waiting so long for Rockstar Table Tennis 2! https://t.co/MnILyYjJBKOctober 16, 2016

ah it's about time they make rockstar table tennis 2 https://t.co/D4toBBVQcZOctober 16, 2016

Although this guy gets a pass for going the extra mile.

Everyone hated this article we did a while back

There was no shortage of reaction memes

Waiting for the Red Dead Redemption Trailer like... pic.twitter.com/rpvIyGaLcZOctober 16, 2016

Although some people's meme game was SO on point

Oh and the Red Dead subreddit totally lost its shit