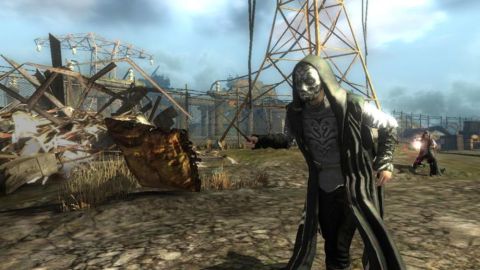 Hey, you three. Yes, you, you, and you. Harry Potter maniac, Harry Potter hater, and guy who read the first chapter of the first book back in eighth grade, got hung up on the fact that the giant wasn't the main character and also riding a dinosaur, and quit reading. You guys. Stop your arguing, because we have something you can all agree on. This, friends, is Harry Potter and the Deathly Hallows Part 1: The Videogame, and no matter who you are or how many times you've dressed up as Harry Potter for Halloween, you will hate this game with every fiber of your being.

Above: Harry battles the dark wizards. Wasn't that a Flaming Lips album or something?

It's really no exaggeration to say that this is one of the worst licensed games – and definitely the worst Harry Potter game – we've ever played. You know how, when people can't hope to understand the actual cause of something, they just jokingly respond with the word “magic”? It's a total cop-out, but here, it fits. See, the only thing that could have spawned a game so glitch-ridden and overflowing with despicable design decisions is some form of dark magic. So then, with that said, where to begin?

First off, the basics: Deathly Hallows is more or less an amateur-hour Harry Potter mod for Gears of War. You may slowly unlock a fairly sizable array of familiar spells, but make no mistake: they're just guns in disguise. Stupefy's your pistol, Impedimenta's your machine gun, Expelliarmus is your shotgun, etc. Combat consists of – you guessed it – clutching to cover like it's your long-lost security blanket and popping enemies with a horrible, awkward lock-on targeting system until they fall down and Apparate back to the Generic Badguy Factory to be replaced by their 24th identical twin cousin. Oh, and half the time, the cover system doesn't even work, so good luck with that.

Above: Harry tries valiantly to escape from his own game, but to no avail

But what about the other unfortunate inhabitants of this hell of a game? Well, the AI – both enemy and friendly – is dumb as dirt, almost always choosing to run in wands-a-blazing like Rambo at a Renaissance faire. Honestly, in this continuity, good doesn't triumph over evil because of the power of love or whatever; it's because one guy (you) understands how to friggin' sit behind a wall instead of absorbing the world's most potent magics with his face. And that's when the AI responds at all. There are plenty of instances – some when you're standing two feet away from an enemy – where it just doesn't trigger, making this a game where the term “braindead AI” is actually quite literal.

Granted, shooting's not all you do in Deathly Hallows. Oh no. It gets worse. There are stealth sections. Long, painful stealth sections that are drawn out by pointlessly tedious objectives and multiple unfair do-overs. See, Harry Potter's bag of tricks isn't limited to mere wands and potions. He has a whole one (1!) other item: an invisibility cloak. So far, so good, right? It's a stylish piece of wizard chic that renders you invisible to the naked eye, after all, so stealth sections should be a breeze. Deathly Hallows' developers, however, made the mystifying decision to switch these stealth bits into a horribly confined first-person viewpoint and make you more likely to have a wardrobe malfunction than a contestant in a mud-wrestling contest. Moving too much? The cloak falls off. Cue Metal Gear-style “Harry? Harry?! Haaaaaaaaaaaaary!” Bump into someone? Same thing.

Above: The Deathly Hallows was filmed on STALKER's set in front of a live studio audience

You can probably see where this is going. Thanks to the first-person viewpoint, you can't see anyone unless they're standing directly in front of you, so maneuvering through bustling crowds of people is pretty much an exercise in luck. Worse still, the magical assholes are constantly teleporting about, so even if you've somehow managed to tip-toe by a crowd without a gentle breeze sending your invisibility cloak into the sun, there's still a decent chance someone might just warp into the perfect position for you to walk right into them. You thought trial-and-error stealth was bad? In Deathly Hallows, even memorization only goes so far.

Oh, if you thought your love for the Harry Potter mythos could steer you through this mess of a game, forget about it. In Deathly Hallows, the story's so disjointed that – even having read every book cover-to-cover – we had absolutely no idea what was going on. Things just sort of randomly happen. For instance, right before it's time to sneak into the Ministry of Magic and pilfer one of Voldemort's horcruxes, you're forced to go on three side missions – none of which have any bearing on the main plot whatsoever. In one, Harry has to escape from a dragon's cave. How'd he get there? No idea. Where are Ron and Hermione? Beats us. It's never explained. But hey, it's not like dark wizards are taking over the world or anything; there's plenty of time for a nice day of magical spelunking hijinks.

Our favorite part of the game? The pause menu. It's got this creepy atmospheric voice track whispering along in the background that really captures the darker tone of the later Harry Potter installments. Also, there's some pretty decent voice acting throughout the game – even if the story it's trying to glue together barely makes any sense.