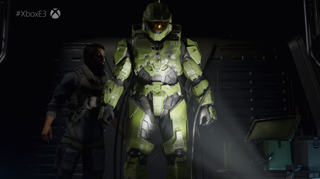 The creators of Halo: Infinite are calling it a "spiritual reboot" for the series, but what does that actually mean for how it plays? The game's first proper trailer was heavy with story teases and light on gameplay details. Thankfully, Xbox Studios head Matt Booty gave some perspective on where Halo: Infinite's taking the series in a new interview.

As the name suggests, Halo: Infinite is aiming to be bigger than anything else in the series. That could have you thinking "open world", but Booty is cautious about throwing those kinds of terms around when Game Informer asks him what has most struck him about the game so far.

"It is a great part of my job to be able to work with [343 Industries], and get previews of things," Booty says. "I think the first thing that is just very cool in where that game is headed, is how they're thinking about expanding the world. I won't go so far as to say 'sandbox', because you bring up sandbox and people sort of overload that term with a lot of other things. But what the team is doing to build a bigger universe and a bigger set of gameplay scenarios and just more things to explore, is awesome. The things they're working on are really cool."

"The second thing is as they bring the Slipspace Engine up to date with where we're at in terms of graphics these days, there's just some cool stuff design wise. It's been really cool to see them get back to some of the shape language and design language of some of the earlier Halos. It could be said that when you get into Halo 5, maybe it was getting a little busy design wise. At once it feels more modern and more clean, but also I think there are stronger echoes back to the roots of Halo. And it's really cool to see that stuff."

Asked to condense that all down into bullet points, Booty offers "more expansive" and "visually impressive". Don't let that discourage you if you aren't planning on picking up Xbox Project Scarlett for a while. Though the game's set to be an early heavy hitter in Microsoft's next-gen lineup, the company says Halo: Infinite will still "look incredible" on Xbox One.

Find more to play in our list of upcoming Xbox One games.