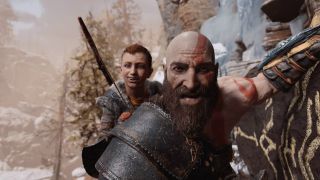 Santa Monica Studio's narrative animator Kim Newman has posted a picture on Twitter in a full motion-capture suit, which could mean that the long-rumoured God of War sequel is in production.

Feels good to be back in the suit.💪 @SonySantaMonica pic.twitter.com/JlfnZB1r8QJanuary 10, 2020

It's the latest trickle of evidence that suggests the studio is working on a sequel. Last year, it posted job listings recruiting for a senior combat animator with a "knowledge of God of War (2018)."

There was also a role for a "Facial Blend Shape Character Artist" that also mentioned knowledge of next-gen, suggesting that Sony Santa Monica is in fact working on a sequel to God of War which will land on the PS5. A next-gen title makes total sense when you consider Sony's next-gen console is slated to release at the end of this year, although should be noted that certain job listings on their careers site specifically mention working on PS4, so there's a chance we could get another adventure on Sony's current console.

A short while after, as GamesRadar+ reported, more job postings were advertised that appeared to hint at where the next God of War game could take place. Interestingly, the postings were looking for an assistant cinematic director and a cinematic artist who had experience in "martial arts and dance." This requirement could be taken in a number of ways, but suggests the next God of War could take place in Eastern Asia.

Nothing official has been revealed about our reunion with Kratos, but outside of the job listings, there have been plenty of hints and rumours circulating about the sequel. Early last year, an interesting God of War PS4 theme also hinted where the series could be heading. The theme saw Kratos and Atreus in a boat with Nordic Runes etched on the side that translates to "Ragnarok is coming," which could spell that the sequel will go in the direction of the Norse apocalypse.

Of course, Sony Santa Monica might be working on an entirely new thing, which is an exciting thing in and of itself. With more evidence mounting that production is picking up pace on whatever their next project is, we can't wait to see more.

In other news, be sure to check out this stunning Mimir animatronic that brings God of War's know-it-all into our realm.