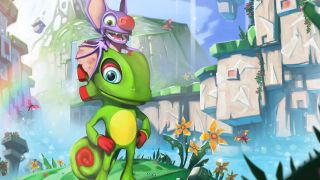 As you no doubt know from our list of the best games of 2017, it was an outstanding year for games, with the spotlight shining on deserving superstars like The Legend of Zelda: Breath of the Wild, Horizon Zero Dawn, and Super Mario Odyssey for months at a time. But when you have so many heavy hitters packed into one 12-month span, anything that isn't exceptionally excellent or abysmally awful gets completely lost in the shuffle - to the point that you might've missed their debut or forgotten their existence entirely. The following titles are all perfectly passable and surely brought someone joy, but they made such minimal impact at launch that they simply drowned in 2017's sea of standout games. Let's jog your memory and break down why these games landed with such a blink-and-you'll-miss-it thud.

Ubisoft first announced For Honor at E3 2015, then it did everything in its power to hype it up as an all-new form of fierce esports competition. The game really did have some clever new ideas when it arrived in February, especially the multi-directional attack system that rewarded reading and reacting to your opponent. Unfortunately, it also had exploits and lag aplenty that hobbled those cool new systems far too often - not to mention a microtransaction-filled customization system that turned off completionists. After almost a year of updates and continued support, For Honor is a better game now than ever before - but when was the last time you heard anybody outside of Ubisoft talking about it?

When you're soft-rebooting a series that became a touchstone for what modern RPGs can be, the pressure's on - and Mass Effect: Andromeda seemed to buckle under the weight of so much expectation. What could've been a bold, Star Trek-esque new direction for BioWare's space-faring adventures quickly revealed itself to be largely more of the same, only with added crafting and micromanagement headaches. Copious comparisons to the original trilogy were inevitable, and mostly unkind: fresh male or female protagonist Ryder lacks the raw charisma of Commander Shepard, and your crewmates don't hold a candle to lovable legends like Garrus or Mordin. If there's any silver lining to all the heat EA's getting for Star Wars Battlefront 2's loot boxes, the endless ire over monetization seems to have completely eclipsed any memories of Andromeda's widely mocked, woefully prevalent animation glitches that went viral just before the game's grand debut.

1-2-Switch seemed like the kind of utterly forgettable game we'd nonetheless remember a year or two later, solely to say "with a launch lineup like that, it's no wonder Switch was a flop." But Switch had a gangbusters launch, thanks in no small part to the brilliant Legend of Zelda: Breath of the Wild, and its first year only got stronger as big games like Super Mario Odyssey and a steady stream of ace indies arrived. Spared from eternal scapegoatery, 1-2 Switch now feels like a relic from an alternate timeline; one where eating invisible sandwiches and counting marbles by rolling them around are cult favorite pastimes.

Sometimes, a ridiculously niche game is destined to stay that way no matter how you slice it. This HD rerelease - which is actually a misnomer for these modern times, as this sucker goes all the way up to 4K on PC - was the endpoint of a tumultuous four-year journey heralding the comeback of a little-known, third-person, card-battler/beat-'em-up blend on the original Xbox. After the hype peaked at E3 2014 for what looked like a full-on reboot, with an intriguing cinematic trailer featuring dueling Espers, it seems oddly anticlimactic that Phantom Dust would come back as a spruced-up free game (original campaign and all) that managed to awkwardly jam card pack microtransactions into its barely populated multiplayer scene. It's still a delightful treat for diehard fans, and a generous gift from Microsoft to resurface such an obscure cult classic - but to anyone who missed the original game, Phantom Dust's triumphant return faded from memory in an instant.

People really like those Banjo-Kazooie games, but Microsoft doesn't seem to want Rare to make a new one (that isn't about building vehicles, I mean). Ergo, Kickstarter. Riding high off the hype of a £2 million ($2.8 million) crowdfunding campaign, the former Rare employees creating Yooka-Laylee promised they would deliver a spiritual successor to the Banjo legacy. And they sure did make a Banjo-ish game - but calling it a successor might be a stretch. In its quest to recreate the N64-era magic, developer Playtonic was a little too loyal for modern gaming tastes. Yooka-Laylee feels like a typical N64 platformer, inconsistent controls and level design included. Put another way: how often do you fondly remember Glover?

It stands to reason that Mark Cerny's continued service to the PlayStation brand - from decades of producing and design consultation for hit games, to taking on the demanding role of lead architect for the entire PS4 and Vita systems - effectively means that Sony owes him whatever he wants. That includes a sequel that seemingly no one else asked for: Knack 2, the follow-up to a (perhaps unfairly) maligned PS4 launch title that fell far short of the Crashes, Jaks, and Clanks it was trying to channel. As with the original, Knack 2 quickly faded from most people's memory as an adequate brawler-platformer that could only surprise youngsters who hadn't experienced previous console generations. But if Cerny still wants to direct Knack 3 at some point despite this sequel's lukewarm reception, then by God, he's earned it.