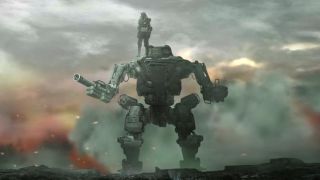 PS4 and Xbox One owners, you won't have to wait until October's Titanfall 2 for a fast-paced mech game with plenty of hot metal-on-metal action and explosions. Hawken is coming to console; July 1 for Xbox One, and July 8 for PS4.

Much like EA's own robotic combat series, Hawken straps players into the cockpits of hulking machines that stride and boost across the battlefield at impossibly fast speeds, using heavy weapons to decimate their enemies. In other words, this isn't a slow-paced tactical positioning game, this is a twitch-reaction FPS.

You may notice that I haven't listed a price. Hawken is free to play, with players able to spend their real-world cash to avoid grinding and unlock weapons and gear faster. The only items that cannot be earned and must be bought using real-world currency are cosmetic unlocks.

Even if you checked out Hawken before (say, between 2012 and 2014 while it was under the care of Adhesive Games) the console version should feel different. There will be 30 playable mechs, nearly double the count from 2014, and new developer Reloaded Games has plans to implement a stronger narrative in the future. In the meantime though, just enjoy the pew-pew.