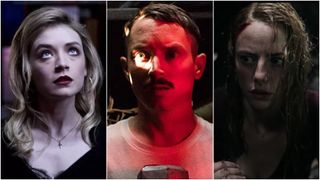 Alligators are the new sharks! Two horror legends combine – The Evil Dead’s Sam Raimi and Switchblade Romance’s Alexandre Aja – for biting suspense and gory thrills. When a massive hurricane hits her Florida hometown, competitive swimmer Haley ignores evacuation orders to search for her missing father. Finding him gravely injured in the crawl space of their family home, they become trapped by the floodwaters. As time runs out to escape, they discover the rising water is the least of their problems – the local alligator farm has been destroyed and its inhabitants are on the loose!

An urban hipster faces major daddy issues in respected genre producer Ant Timpson’s directorial debut feature. Written by The Greasy Strangler co-writer Toby Harvard (based on an idea by Timpson), we meet the 30-something Norval (a career best performance by Elijah Wood) who’s been invited to his father’s space-age design cliff house. Nervous and desperate to impress his perpetually uncaring dad, Norval stretches the truth about his life until finally his father’s growing animosity towards him reaches a dark fever pitch. From here on, all genre-blending bets are off as this hilarious, gross and shocking-to-the-extreme adventure moves smartly towards its most uncompromising and unexpected finale.

Watch out world - EAT BRAINS LOVE will be unleashed @FrightFest Aug 25! With much gratitude to @alanfrightfest @paulmcevoy & their team. I am ecstatic to premiere this mutation with you. #Frightfest #FrightFest20 #ArrowVideoFrightfest pic.twitter.com/385FniLwLBJuly 4, 2019

Based on the living dead road trip novel by Jeff Hart, a gory, funny, surprisingly engaging zom-rom-com from Rodman Flender, director of Idle Hands. The good news: Jake’s dream girl, Amanda, finally knows his name. The bad? It’s because they both contracted a sexually transmitted zombie virus and devoured the brains of half their senior class. Now both are on the run from Cass, a teen psychic sent by the government’s top-secret Necrotic Control Division to track them down as they search for a cure while weighing up the existential question of who really deserves to be eaten alive.

The hugely anticipated remake of David Cronenberg’s body horror classic from American Mary directors, the Soska sisters. What happens when you realise that to achieve your dreams you have to live a nightmare? Rose wants to become a famous fashion designer, but a terrible accident leaves her scarred beyond recognition. Undergoing a radical untested stem cell treatment, Rose turns into the belle of the ball and starts to realise her ambitions. But everything in life comes at a price and her new found perfection is no exception as she unwittingly sets off a bloody spiral of contagion.

A Good Woman is Hard to Find

Recently widowed mother of two Sarah (Sarah Bolger, Emelie) is desperate to know who murdered her husband in front of their young son, rendering him mute. Coerced into helping low-life drug-dealer Tito (Andrew Simpson, Road Games), she’s forced to take drastic action to protect her children while learning the awful truth about her spouse. Director Abner Pastoll tempers his bloody shocks with a human touch that cuts right to the emotional core of his gripping study in cumulative tension. Anchored by Bolger’s stunning turn, she never puts a foot wrong evolving from downtrodden submissive to take-charge vigilante. She guarantees our quivering attention in a multi-faceted gem.

From Some Kind Of Hate director Adam Egypt Mortimer, an unflinching examination of what can happen when the id, the ego, and the superego are all at war with each other. In this Mandy-esque slice of provocative psychological horror, a troubled young man’s imaginary friend from childhood returns as an adult eager to indulge in darkly disturbing desires. This is an innovative and thought-provoking descent into madness, one that pushes storytelling boundaries and delivers truly nightmarishly surreal visuals. Mortimer tackles the topic of duality with self-confidence in a mesmeric fairy tale fantasy that morphs into chilling cosmic horror.

The Devil Rides Out meets Society in this elegant, sexy, funny and gory Fangoria feature with a cult cast to die for. Times are tough for cancer survivor Sam, eking out a meagre existence delivering pizza. Offered a final delivery to a wealthy neighbourhood with the chance of healthy tips, she unfortunately gatecrashes a ritual being carried out by an elite Satanist sect. The only thing missing from their black ceremonial orgy to rebirth the Dark Lord is a virgin sacrifice. And guess what? Sam fits the bill. Can she make it out of country club hell in one piece?

Director Jennifer Reeder’s tender, feminist teen noir fantasy redefines the high school movie with visionary élan. In rural Illinois, a drum majorette’s disappearance traumatises the small town residents as secrets are revealed, destroying some relationships and strengthening others. Three girls form a bond in the aftermath of the tragedy as everyone struggles with their own infidelities, dreams and family cruelties while the manhunt continues. Think Sofia Coppola meets David Lynch on the set of High School Musical in this superb portrayal of teenage angst, rage and disillusionment.

Fabulously inventive, outrageously gory and a constant WTF from sci-fi beginning to camp-as-Christmas ending, it’s the exploitation revelation of the year! During World War III, the American government initiates a secret project codenamed “Army Bacon” in order to create super soldiers by inbreeding humans with pigs. Twenty-five years later the hybrid Muzzles have occupied the top of the food chain, eating and farming humanity. Ex-bounty hunter Rob Justice works for the last line of human resistance – a group of survivors hiding in a nuclear bunker deep underground – and his mission is to search and destroy Muzzle Central.

Why Don't You Just Die

A roaring rampage of stylish revenge with a fabulously comic tone and superb Ennio Morricone pastiche score, here’s a stunning slice of bloodthirsty Russian crime and punishment in the high tone Tarantino manner. Corrupt detective Andrei brings together a terrible group of people in his apartment: his resentful actress daughter, an angry thug, his timid wife, and a cheated cop. Each one of them has a reason to kill him, but will they succeed? A splatterpunk action comedy drenched in gore, marking an exciting feature film debut from director Kirill Sokolov, this carnival of carnage is a total delight.