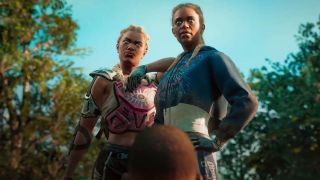 I love Ubisoft as much as the next Assassin’s Creed fan, but it’s difficult to deny that the company has a terrible, terrible habit of, well, not being able to break any of its terrible, terrible habits. Whether it’s using social media as a vehicle for character progression or slapping the same blueprint across all of its open worlds regardless of genre, you often know when you’re playing a Ubisoft game, because chances are you’ve seen the same grab bag of systems and mechanics in countless other Ubisoft experiences before.

For the most part, the company's affections for self-established cliche applies exclusively to its trademark open world gameplay but, after recently blitzing my way through the campaign of Far Cry New Dawn, I’ve noticed another Ubi-trope that’s long since lost its efficacy, this one pertaining specifically to the Far Cry series itself. With mild spoilers ahead, it goes a little something like this…

Every Far Cry title since Far Cry 3 has featured a big, central villain, so important to the rebooted identity of the series that each one (with the exception of Far Cry Primal) is seen posing menacingly, front and centre, on the game’s cover art. In these Far Cry games, your character will meet the villain right at the start of the story, via an opening cutscene where they’ll chew the scenery with a dramatic monologue, get extremely close to your face to show you how lovingly they’ve been motion captured, and probably kill someone in a violent and eccentric manner with an everyday object (pen, plate, etc.) just to emphasise that, yes, they are indeed a Bad Guy™.

Yet, in a stroke of luck (and narrative necessity), your character will manage to escape from said villain at the last minute, only to see them a few more times throughout the main story after that. They can usually be heard over the radio, of course, shaking their fists somewhere off screen whenever you liberate another part of the open world from their clutches but, otherwise, they’ll have little involvement or presence in your one-man Rambo revolution.

Then, right at the end, you’ll meet your primary antagonist for the third (maybe fourth, if you’re lucky) and final time. There may or may not be an actual boss fight against them, but usually it’s just a parting cinematic - in which they’re given one last opportunity for yet another theatrical diatribe – before the game ends for good. Once upon a time, this device for depicting a centrepiece villain was scary, compelling, and fresh. Now, seven years and five games later, it feels like Ubisoft is going through the motions.

You can understand why the publisher has stuck with Far Cry 3’s once winning formula when it comes to characterising the series’ antagonists. The critical response to Vaas placed him firmly in the pantheon of the best game villains, so any company with an iota of business sense would want to naturally ride off the coattails of his success.

This led to Far Cry 4’s Pagan Min, a flamboyant dictator horribly overplayed by Troy Baker, who was clearly a bit too keen to follow up and replicate Michael Mando’s enigmatic charm. Then came Far Cry Primal, whose dual antagonists were so forgettable that I couldn’t even tell you their names, but it’s Far Cry 5’s Joseph Seed who represents the most egregious example of the franchise’s mishandling of its villains so far.

A cult leader who’s all show and no substance, Seed uses every second of his screen time in Far Cry 5 to spout meaningless waffle caked in pseudo-eschatological jargon. I was never scared of Joseph Seed, because you never truly feel as though he poses any threat to you outside of his cutscenes, like a malevolent genie with no tangible connection to the physical space your character occupies in the game itself. By the end of Far Cry 5, I wanted Seed dead, not out of any sense of heroic indignation, but because I was tired of his incessant proclivity to invade my personal space, constantly babbling something inconsequential about the Lord’s Wrath.

As for Far Cry New Dawn’s twins, Mickey and Lou, Ubisoft has demonstrated a willingness to change things up somewhat, establishing several “firsts” for the series with a pair of black women serving as the game’s primary antagonists. It certainly makes for some bold, uncompromising cover art, but Ubisoft’s depiction of the twins follows the same track the franchise has been riding along for years and, in doing so, New Dawn doesn’t do justice to their potential as a fearsome twosome of apocalyptic proportions.

You’ll meet Mickey and Lou a handful of times throughout the campaign, majoritively through (yep, you guessed it) heavily choreographed cinematics segmented between the story’s clearly defined chapters. In each one, they’ll rigidly play the designated part of the Vaas-style villain; waxing lyrical, getting up in your face, demonstrating a sociopathic joy for being the bad guys, and finishing off the performance by committing a needlessly cruel act upon a friend or comrade, clearly designed to fuel your hatred of them a little more.

And so, just like Joseph Seed and Pagan Min, the pair turn out to be another hollow product of Ubisoft’s misguided attempts to recreate the magic of 2012. Resultantly, they come across as little more than arbitrary placeholders designed to slow down your character’s forward momentum, existing merely to fulfil a superfluous criteria for a Far Cry game. It also doesn’t help that, again, Ubisoft refuses to find ways to meaningfully integrate the twins into New Dawn’s gameplay aside from hearing them over radio chatter, unconvincingly taunting you from afar.

A good Far Cry villain is one whose fiendish aura lingers under the skin long after you’ve encountered them, but the franchise’s gauntlet of foes this generation has ranged from the throwaway to the downright offensive. And while players were once too enraptured by Michael Mando’s performance to care that he was absent from most of Far Cry 3, these characters’ continued detachment from the world they supposedly overrule feels increasingly outmoded.

Ubisoft is thus bound by a curse of its own making, and it’s hurting the quality of Far Cry’s storytelling, but there’s no reason why that can’t change. With the dawn of next-gen on the horizon as the PS5 and Xbox Project Scarlett come into view, this once industry leading franchise needs to evolve and adapt if it wants to stay relevant, and that includes the way it handles its love-to-hate cover stars.

This is the publisher that successfully turned Assassin’s Creed into an RPG, created one of the first sustainable AAA live service games with Rainbow Six Siege, and somehow managed to make a Mario/Rabbids mashup that wasn’t terrible in Mario + Rabbids: Kingdom Battle. Now, with Far Cry’s villains, Ubisoft just needs to take a tip from the man it’s been worshipping since 2012, and stop doing the same thing over and over again.