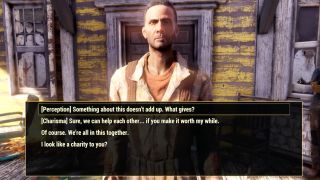 Bethesda has announced that the Fallout 76 Wastelanders DLC is coming to PC, Xbox One, and PS4 on April 7.

The big expansion, which is coming as a free update for all players, is set to bring fully voiced NPCs to Appalachia for the first time and introduce a new main quest. At the launch of the Wastlanders DLC, Fallout 76 will also be available on Steam for the first time.

The new main quest coming to Fallout 76 will see you setting out to "uncover the secrets of West Virginia." Alongside the new main quest, the original main quest line has been revamped. With new locations and missions to tuck into, there'll be something for first-time players and veteran vault-dwellers alike.

And, of course, the biggest change coming in the DLC will see human NPCs breathe new life into the post-apocalyptic setting. As one of the most requested features, NPCs have returned to rebuild and it's up to you to decide if you want to befriend them or create new enemies for yourself as you go about your adventures.

In classic Fallout fashion, the Wastelanders DLC brings back branching dialogue trees and choices with consequences. With a new reputation system, every decision you make will affect your standing with each faction.

Outside of the new faces you'll meet in Appalachia, there'll also be some less friendly additions. Newly mutated creatures have made their way to the region, and by taking them down, you can earn yourself some shiny new armor and weapons of the highest tier.

At launch, Appalachia was completely devoid of NPCs, and you would instead have to get your quests from holotapes, terminals, and notes. The Wastelanders DLC looks set to return Fallout 76 to the strong RPG roots of the series, and will hopefully make Appalachia feel more alive than ever before.

Read about how Fallout 76 is a surprisingly sharp reflection of how we could survive the apocalypse.