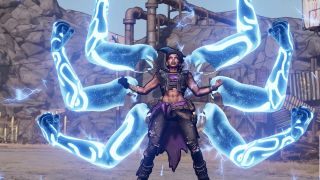 You already know Steam sales, now meet Epic Games Mega sales. The PC game storefront has kicked off its first big promotion with steep discounts on games from May 16 through June 13. This sale has the usual set of savings (up to 75% off depending on the title), but what makes it sort of weird and very exciting is the Epic Discount: an extra $10 off on any game that costs $14.99 or more, which Epic says it's covering from its own coffers. Thanks, Fortnite money!

My Time at Portia is usually $29.99 on the Epic Games store. During the Epic Mega Sale, the price is nominally cut to $23.99. Because the discounted price is still above $14.99, it receives the $10 Epic Discount, dropping the price to just $13.99. Hades, the new early-access game from the developers of Bastion, is a paltry $6.99 with all discounts applied compared to its usual $19.99 price tag.

Here's where it gets possibly too good: the "$10 off for any game over $14.99" part of the promotion applies to pre-orders, too. That means you could lock down your copy of Borderlands 3 right now for $49.99 instead of the standard $59.99 it will cost when it comes out in September. Or if you've been waiting to play Detroit: Become Human on PC, you could pay $29.99 now instead of $39.99 when it arrives on the Epic Games store, er, soon. Or you could own John Wick Hex, which was announced last week, for $7.99 instead of $19.99 if you pre-order it during the Mega Sale. This isn't how video game sales are supposed to work! I feel frightened but also excited!

Even if you don't want to drop any cash at all, you'll still see a benefit throughout the event: the Epic Games store will offer up a new game for free every week instead of biweekly starting with metatextual horror anthology Stories Untold (you'll still have two weeks to claim them). Also also: the name Epic Mega Sale is a nod to the company's old, oh-so-nineties name: Epic MegaGames. Adorable.

Why not use some of that money you save to get yourself the best gaming PC you've ever had? Or see what's up with that other Epic Games store product with our video rundown Fortnite season 9's biggest changes.