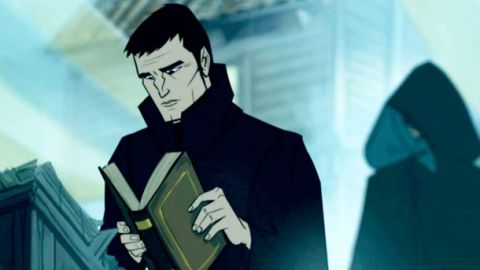 It’s been over two years since Tom Hanks unveiled his plans for Electric City , a sci-fi/noir series the actor has had penned since 2003. Finally the series sees life in the form of 20 five-minute webisodes released exclusively through Yahoo! Movies, with company Vice President Erin McPherson touting it as “the first in what we call online digital blockbusters”. Yahoo! may have high hopes for it, but with Bryan Singer’s forthcoming H+ tipped to change the game when it comes to web series, Electric City might be too little too late to light up the internet.

The series follows the citizens of Electric City, a post-apocalyptic settlement where communities have become completely dependent on electrical power. Hanks voices Cleveland Carr, a “grid operative” working to uphold the city’s motto of “all in service for all”. Those found illegally tapping into the power system are punished without mercy. Working for Electric City’s founding members, a group of elderly women known as the knitting society; Carr investigates an uprising to restore freedom to the people through wireless electrical service.

From the plot it’s clear that Electric City is presenting some sort of environmental message, but exactly what it is isn’t so clear. In fact ambiguity is something the series seems to thrive on. The two sides of Electric City – the fascist regime determined to prevent another apocalypse and the uprising seeking to overthrow it – are both working towards what they believe will save the world. There aren’t clear heroes or villains, making things all the more interesting. But the series never gets to properly develop these ideas, hindered by its meagre running time. Episodes end as soon as the plots unfold, and character development suffers.

Hanks’ Carr is the only really memorable character, a suave rogue by day and by night what the Punisher might be like if he worked for British Gas. That said, it’s difficult to take a violent enforcer that seriously when he sounds like Woody from Toy Story .

The sheer scale of the world Hanks has built is another thing screaming to burst out from the format it has been placed in. Scene transitions are accompanied by a Game Of Thrones style map, and the number of questions raised by the setting work well to add to the noir element. But plans to answer the questions through interactive features such as mobile phone games and apps aren’t a step in the right direction – if the show isn’t good enough to stand on its own, then why bother with the extra features?

The animation, however, is top notch, and worthy of considered being called a “digital blockbuster” in that regard. Carr is your stereotypical square-jawed noir hero, but set upon a beautiful orange-skied landscape rather than a towering grey city. What the characters lack in personality they make up for in design, each one distinct and fitting in perfectly with Electric City ’s unique look. At the very least, Electric City serves as a reminder that traditional animation can still be a heavy hitter in a world that’s seen an influx of CGI-based shows.

Electric City is an ambitious tale that certainly shows potential, but doesn’t feel at home within a web format. Had the episodes been released more sporadically, it probably wouldn’t muster enough intrigue to warrant regular viewing. Not only is it not the success Yahoo! were hoping for, but their very site is showing the world how badly it’s doing. When you release a web series, the last thing you want is the videos’ view counters showing the massive decline in people watching as the episodes go on.

Episodes of Electric City can be viewed here